Ukraine Says It Agrees On Interim Gas Price With Russia

October 19, 2014
MILAN, Italy -- Ukraine's and Russia's leaders have reached a preliminary agreement on a price for gas supplies this winter but Kiev may need international help to pay, Ukrainian President Petro Poroshenko said on Saturday. 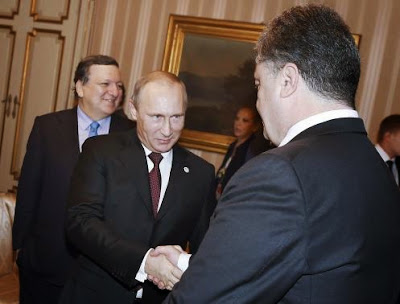 Russia's President Vladimir Putin (L) shakes hands with Ukraine's President Petro Poroshenko as he arrives for a meeting on the sidelines of a Europe-Asia summit (ASEM) in Milan October 17, 2014.

Russia cut off gas supply to Ukraine in mid-June following more than two years of dispute on the price.

Russia said Ukraine had to pay off large debts for previously-supplied gas before it would resume supply.

"(We) reached an agreement," Poroshenko said in an interview with Ukrainian TV channels.

An agreement signed in 2009 by former Prime Minister Yulia Tymoshenko called on Ukraine to pay $485 per 1,000 cubic meters for Russian gas.

Kiev is contesting the contract in a Stockholm arbitration court.

Poroshenko said that state-run energy company Naftogaz was short of funds to pay for Russian gas partly because of debts created by consumers in eastern Donetsk and Luhansk regions, controlled by pro-Russian separatists.

"We must solve the question of how we cover the deficit of funds for Naftogaz for gas purchases," Poroshenko said.

"We have several different options (including) the International Monetary Fund."

He said a mission of the IMF is due to arrive in Kiev in mid-November to discuss amendments to the current loan program for Ukraine.

Poroshenko said the next round of gas talks was likely to take place on Oct. 21 in Brussels.