October 23, 2014
DONETSK, Russia -- Fighting is still going on in eastern Ukraine, despite a ceasefire deal signed on 5 September, and many pro-Russian rebels have no desire to see it come to an end. 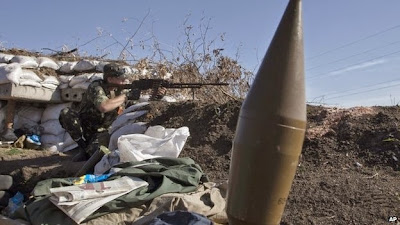 Pro-Russian rebels have taken over broad swathes of Donetsk and Luhansk.

As voters in most of Ukraine prepare to go to the polls on Sunday to elect a new parliament, the rebels in the east are planning their own vote a week later.

For many of the pro-Russian rebels, both local and Russian volunteers, their political vision for the region is the creation of "Novorossia", a kind of new, improved Russia.

"We are fighting for the liberation of all Russian lands and we are ready to march all the way to the Danube," says Alexander Matyushin, a rebel field commander.

"We must restore the historic injustice which befell the Russian people in the 20th Century. We need to take land which is ours by right and bring it back into the fold of Holy Russia."

Matyushin's fighters - just over 100 of them - are stationed in his native Makiivka, a suburb of Donetsk, which is the largest city under rebel control in eastern Ukraine.

The great irony of this conflict is that 10 years ago Matyushin was on the other side of the political divide which now splits this country in two.

He used to work with a far-right Ukrainian nationalist, Dmytro Korchynsky.

"We had the idea of a Christian Orthodox revolution back then," explains Matyushin.

"Our ambition was to create an Orthodox al-Qaeda."

Despite their once-similar vision, the two men have followed very different paths: Korchynsky is on the run while Matyushin commands a military unit and believes he is within touching distance of realising his ambition to the create his dream of a New Russia.

He proudly shows off his battalion insignia: a skull and cross-bones with the motto, "The more foes, the greater the honour".

"Freedom is valued only when it is paid for by blood," he says with a steely note in his voice.

"We have to sacrifice the lives of countless heroes before we can fully realise our destiny."

There are no easy ideological lines to draw in this conflict.

Take Yaroslav Reshetniak, a musician who lives in Russia.

He says he has "Ukrainian roots" and has been friends with Ukrainian nationalists in the past, but not any more.

He believes Ukrainians, like himself, naturally belong to the Russian world.

His songs, a Russian nationalist call to arms, are widely shared online and serve as a powerful recruiting tool to attract fighters from all over Russia.

Does it make him happy to see a "New Russia" born out of war, death and destruction?

"I feel sorry for everybody, even for Ukrainian soldiers," he replies.

"But there is no other way. I hope we will march on Kiev, and each region of Ukraine will have its own referendum to decide if they want to be part of Russia, part of Ukraine or to create an independent state."

"If western Ukrainians do want to be part of Ukraine, I would let them. The will of the people is, for me, above all else."

Although many of the rebel fighters in the east quietly admit to being tired of war, their mantra is "we are fighting now so that there are no more wars in the future".

The rebels say they have 18,000 volunteer fighters, mostly from Russia, and that more are keen on joining.

Several far-right organisations are involved in the online recruitment process.

One of them is the Eurasian Movement, a far-right political group with an international reach, founded by ultra-nationalist philosopher Alexander Dugin.

Close to the Ukrainian border, in the Russian city of Rostov, one of Dugin's Eurasian activists, Mikhail Uchitel, is working with Russian volunteer fighters who have been signed up online in preparation for their journey into Ukraine.

Although the recruitment process is taking place in Russia, Uchitel is adamant that the rebels do not answer to Moscow.

"The Donetsk and Luhansk people's republics are political entities about to conduct elections," he says.

"Soon we will talk not about a rebel force but a proper army, the army of Novorossia."

For field commander Alexander Matyushin, the current ceasefire in eastern Ukraine is no more than a strategic pause.

In the winter months, he says there will only be local clashes, but the rebel offensive will resume in spring.

"You cannot subjugate people who have experienced real freedom. Eventually, I am sure, victory will be ours."