October 21, 2014
KIEV, Ukraine -- A report by Ukraine's parliament revealed Monday that more than 300 soldiers were killed during a weeks-long battle that marked a crushing setback in the military campaign to root out pro-Russian separatist forces in the east. 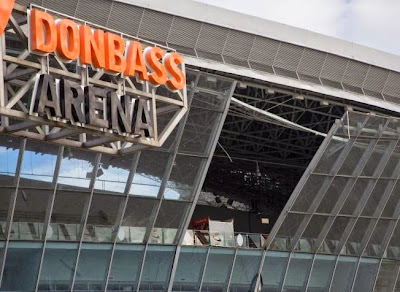 The Donbas Arena stadium, one of the venues which hosted the Euro 2012 Soccer tournament, after it was damaged by a shockwave caused by a blast during shelling in the town of Donetsk, eastern Ukraine Monday, Oct. 20, 2014. A powerful explosion has shaken the largest rebel-controlled city in eastern Ukraine as daily battles continue in the region despite a nominal cease-fire being in place.

The report is the first official confirmation of the scale of a defeat in the city of Ilovaisk that critics of the country's military command have described as the result of disastrous leadership.

It is believed the ultimate number of servicemen lost may be even greater, and the parliamentary inquiry into the Ilovaisk battle complained that military authorities have failed to cooperate.

"Neither the Defense Ministry nor the General Staff has responded to queries from the investigating committee about losses in the armed forces," the committee said in a statement.

Ukrainian forces mounted an assault on Ilovaisk in early August only to eventually find themselves besieged by heavily armed separatist fighters.

A cease-fire deal struck a month ago by Ukraine's President Petro Poroshenko, Russian President Vladimir Putin and the rebel leadership is often violated.

German Chancellor Angela Merkel said Monday "there's a long way to a cease-fire, unfortunately," given the number of people who have been killed since the deal was struck.

Europe is seeking full compliance with the cease-fire, clear border controls and local elections in eastern Ukraine in compliance with Ukrainian law, and not under auspices of the rebels.

Speaking in Slovakia, where she met with its prime minister, Robert Fico, Merkel said Ukraine's territorial integrity must be ensured "not just on paper" and that the cease-fire plan has to become effective in all its details.

In Ilovaisk city in August, government troops sustained heavy losses of life attempting to flee the area and were easily picked off by rocket and artillery fire as they fled in columns.

AP reporters counted more than 30 charred Ukrainian military vehicles on the route out of the city in early September, when the battle had come to a close.

The defense minister in command at the time resigned last week.

Ukraine maintains that rebel forces have been amply supplied with weaponry by Russia and that their military setbacks would not have occurred without Moscow's interference.

Russia continues to deny such claims.

The intensity of fighting in the east has abated since late September, when the warring sides agreed on the nominal cease-fire, but shelling continues daily.

On Monday, a powerful explosion shook the largest rebel-controlled city of Donetsk, causing shockwaves that were felt over a radius of several kilometers.

Numerous buildings, including the Shakhtar Donetsk football club, were damaged as a result.

The explosion, which occurred at a rubber processing factory used to create components for ammunition, was succeeded by multiple barrages of outgoing rockets fire from the city.