October 27, 2014
KIEV, Ukraine -- Pro-Western parties will dominate Ukraine's parliament after an election handed President Petro Poroshenko a mandate to end a separatist conflict and steer the country further out of Russia's orbit into Europe's mainstream. 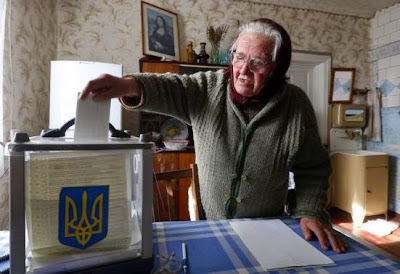 A local resident places her ballot into a mobile ballot box during a parliamentary election, at her home in Horodyshche near Chernihiv, October 26, 2014.

Poroshenko planned to start coalition talks on Monday after exit polls and partial results showed most of the groups that were holding up democratic and legal reforms demanded by the European Union had been swept out of parliament on Sunday.

He still faces huge problems: Russia is resisting moves by Kiev to one day join the European Union, a ceasefire is barely holding in the east where government forces have been fighting pro-Russian separatists, and the economy is in dire straits.

Russia's President Vladimir Putin can still influence events, not least as the main backer of the rebels in the east and through Moscow's role as natural gas supplier to Ukraine and the EU.

But with his own bloc and a party led by his ally, Prime Minister Arseny Yatseniuk, running neck and neck on more than 21 percent support after more than a quarter of votes on party lists were counted, Poroshenko is assured of dominating parliament.

"The majority of voters were in favour of the political forces that support the president's peace plan and seek a political solution to the situation in the Donbass," Poroshenko said soon after polls closed, referring to the region where fighting has been heaviest in the industrialised east.

Final results from voting on party lists and single-seat constituencies will not be known for days.

But with a third like-minded party, Selfhelp, on 11 percent with 38 percent of votes counted, Poroshenko can forge a strong coalition government.

The 49-year-old confectionery magnate is likely to continue working in close tandem with Yatseniuk, with the latter possibly staying on as prime minister to handle sensitive talks with the West on aid for the war-shattered economy.

A hawk in dealings with Russia, Yatseniuk is liked in the West for his commitment to deep reforms and astute stewardship of the economy which has been wrecked by the separatist conflict in the eastern regions.

The Kiev government says it is hoping for modest economic growth next year after a 6 percent decline in 2014, but the World Bank expects the economy to continue shrinking.

In line with measures agreed with the IMF, Yatseniuk's government has cut budget expenditure and let the Ukrainian hryvnia float.

The currency has lost about 40 percent of its value against the dollar since the start of the year.

Timothy Ash, emerging market analyst at Standard Bank, described the result as a "big vote for the Western reform agenda".

Yatseniuk was well placed to remain prime minister, though his success would be "negatively received by Russia", Ash wrote in a research note.

"This is a big victory for pro-Ukrainian and statehood (anti-Putin) parties, which will be in the vast majority in the new parliament. A big vote for Ukrainian independence."

Poroshenko and his allies are trying to restore normalcy to the sprawling country of 46 million after turmoil and violence that began a year ago with street demonstrations against Poroshenko's pro-Russian predecessor Viktor Yanukovich.

Yanukovich was overthrown in February in what Russia called a "fascist coup".

More than 3,700 people have died in fighting in the east, including nearly 300 passengers on a Malaysian airliner shot out of the sky over pro-Russian rebel-held territory.

Moscow has also cut off gas supplies to Ukraine in a dispute over the price and unpaid bills, causing alarm in the EU which gets a third of its gas needs from Russia, half of it via Ukraine.

Heavy shelling on the outskirts of the rebel stronghold of Donetsk in the east on Monday served as a reminder of the fragility of a ceasefire agreed there on Sept. 5, though there was no word of any casualties.

Some allies of Yanukovich will remain in parliament: the latest figures put the Opposition Bloc of ex-Fuel Minister Yuriy Boiko on 9.76 percent, easily enough to put the party into parliament.

But other traditional allies of Russia, such as the communists, flopped.

The make-up of the future pro-Europe assembly seemed likely to spell future tensions with Moscow.

It will be the first time the communists have been out of parliament since Ukraine gained independence from the Soviet Union in 1991.

After months of beating back the separatists, Ukraine's troops faced sharp reversals in August, which Kiev and its Western backers say was caused by Moscow sending armoured columns with hundreds of troops to aid the rebels.

Since then, Poroshenko has said he will resolve the conflict in the east only by political negotiations.

NATO says Russia is still supporting the rebels in the east with soldiers and equipment.

In an early reaction to the vote, Russia's foreign ministry said the election offered a chance for peace in its east but that a high number of "nationalists" in the chamber could undermine the process, RIA news agency reported.

Voting did not take place in areas held by the rebels or in Crimea.

Separatists entrenched in the big eastern cities of Donetsk and Luhansk said they were ignoring the Ukrainian election and still planned to go ahead with a rival vote on Nov. 2 to further their calls for independence.