Ukraine Fighters, Surrounded At Wrecked Airport, Refuse To Give Up

October 29, 2014
DONETSK, Ukraine -- Only three floors remain in the blackened skeleton of the seven-story, glass-walled airport terminal, opened with a burst of national pride two years ago for the Euro 2012 soccer championship. 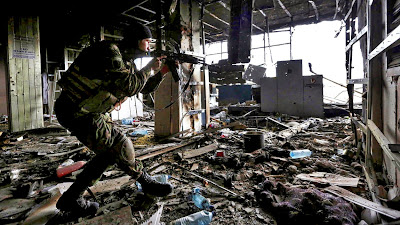 A Ukrainian soldier patrols inside the Donetsk airport. It has been the scene of fierce fighting between government troops and pro-Russia separatists since May.

Ukrainian commandos control two of them: the ground and second floors. The pro-Russia separatists they're fighting have infiltrated the third floor despite entrances barricaded with debris and booby traps.

The separatists have also found a way into the basement, with its system of narrow passageways leading beyond the airport grounds.

They are enemies sharing the same building, playing a claustrophobic game of cat and mouse in shadowy rooms and burned-out boarding jetways.

The grenade hit a wall and exploded.

Without thinking, a commando nicknamed Batman threw a hand grenade toward the balcony.

But it exploded short of its target and sent more shrapnel showering over his comrades.

The shouting had barely subsided when a commander announced that government Grad missiles were on the way to hit enemy positions surrounding the terminal.

"You know how they do it!" the commander shouted.

A few seconds later, the building shook from the explosion right outside, and for a moment it seemed that the structure would finally collapse.

But it withstood the blast, and no one was hurt in any of the attacks.

Just after midnight on a recent night, a separatist fighter suddenly appeared on a balcony of the third floor and shot a Mukha grenade down at the onetime departure lounge where the Ukrainian troops were trying to sleep on cold concrete floors.

After five months of fighting, the battle between government forces and pro-Moscow separatists in eastern Ukraine has reached what may be its last stand in this shattered commercial airport that once held families waiting for holiday flights.

It has little strategic value, but it has become a symbol of the struggle over Ukraine's future.

"Today for us the future of our country depends on whether we will be able to hold on to this airport or not," said Alexei Varitsky, 20, a former construction worker who recently joined the Ukrainian militia that's helping to defend the airport.

The name once shone in white above the gleaming new terminal: Donetsk Sergey Prokofiev International Airport, named after the 20th century composer who was born in the region.

At the opening ceremony in May 2012, then-President Viktor Yanukovich paid tribute to its modern accouterments, as if it were proof of Ukraine's growing international status.

"At the beginning of the 1930s, the constructors of this airport had no idea what a high-technology site it would grow into," he said.

Today, the pro-Russia Yanukovich is no longer president.

He was ousted this year in a revolution that led to Russia's annexation of the Crimean peninsula and armed revolts in eastern Ukraine, also reportedly sponsored by the Kremlin.

On the airport's English-language website, a bulletin reads: "Notice for passengers: Donetsk airport has been temporarily suspended. An up-to-date information regarding the status of flights is available on the official website Online Timetable."

Would-be passengers clicking on "All Flights Today" are met with a blank space.

The airport's runway is littered with the carcasses of tanks and armored personnel carriers.

In the new terminal, every pane of glass has shattered; every door, wall and ceiling has been pierced with bullets and shrapnel.

The separatist forces surrounding the airport shell it with mortar and artillery fire day and night; at least once a day, infantry forces move in for an attack.

The defenders said that in the previous two weeks, 12 soldiers were killed and scores were wounded at the airport.

Some government forces say they're digging in to prevent Russians from using the runways to land transport planes loaded with armaments.

Some say they need to defend the airport as a sign of resolve against Russian aggression.

"I volunteered to come here because if I hadn't, some soldier might not have been replaced and that would have prolonged his misery or could have even killed him," said Sergei Halan, 20, a journalism student from Cherkasy.

"I just did it to save a comrade I may not know, as he will do for someone else, or even for me."

Halan's estranged father is a colonel in the Russian army.

When they last spoke on the phone, Halan said, his father asked him, "'Don't you know you will be killing your brothers?'

To which I said, 'I didn't invite these brothers to come to my homeland with arms.'"

They are hunters and prey at the same time.

Because of their perseverance and ability to survive despite being surrounded, the government forces' enemies call them cyborgs.

Some of the terminal's defenders call themselves terminators.

"The whole scene very much reminds me of a computer shooting game, with the exception that you don't kill goblins so easily and that you don't have an extra life or two," said Varitsky, the former construction worker, a wiry man in a U.S.-style uniform and NATO-like helmet.

"I'm kind of OK with what we do here, although I could never for the life of me imagine before that I can kill other people."

In April, when the army told him it didn't have time to train him, Varitsky joined the nationalist Right Sector organization.

He went through a rushed training session, was issued a Kalashnikov and a week ago arrived at the airport with a ragtag group of 15 Right Sector men who are supporting an army unit consisting mostly of airborne troops who volunteered for the high-risk mission.

Every newcomer is told that the airport is not a besieged fortress — not because it is not besieged, but because it is not a fortress, "as holes in the walls account for more space than the rest of the structure," said Maj. Valery Rud, who is in charge of mining and de-mining the building.

"There is not a single place where bullets or shrapnel cannot reach you at any given time of the day. The terminals we are holding on to are weaker than the Three Little Pigs' houses, and it is a miracle that they are still standing."

The defenders are armed with an assortment of Soviet-era small arms, mostly Kalashnikov machine and submachine guns, and are dressed in all kinds of uniforms, helmets and jackets supplied by volunteers or issued by the army.

During the day, generators feed small laptops and charge telephones.

At night, radios and flashlights are switched off, and it's forbidden to use even cigarette lighters lest it draw sniper fire.

At night the temperatures inside fall below zero and constant, merciless drafts chase coughing and sneezing soldiers.

A paramedic sits in front of a small hill of medicines looking for the right cold drug for the suffering men.

"Well, why don't you unfasten your helmet strap?" he told the coughing young soldier in front of him.

"If a sniper sends a bullet into your helmet, [the strap] will break your neck and you won't need any medicines anymore, sonny."

The soldier undid the strap.

The Ukrainian troops may lack proper training, but at times they display courageous initiative.

As troops were getting ready to unload an armored convoy bringing drinking water and ammunition — an operation that always draws intense fire from the separatists — two soldiers decided it was time to send "the tank man" home.

The tank man had died in a fierce battle a week earlier outside the terminal.

Although they had retrieved the bodies of his two comrades, they hadn't been able to reach him.

It bothered them that he was still there.

Risking their lives in the crossfire that ensued when the transport convoy arrived, the two young men ran out onto the tarmac and retrieved the charred remains.

"We had to do it for this tank man," said one of the men, who identified himself only as Slavik, after he had reached the relative safety of the terminal.

"The guy was a hero. He deserves to be identified and buried properly."

One morning, gunfire rattled inside the terminal.

Bullets whizzed by, hitting walls and the floor around the defenders.

It was coming from a disabled jetway.

A moment later, it was over.

A commander nicknamed Rakhman stood outside the terminal near the jetway.

He looked at the smoking gun in his hand.

"I loaded a whole clip into him," he said.

"Instead of falling down, he shot back at me and was gone as if he is a cyborg and not me."

"We need to do something to smoke them out of there," one soldier said. But how?

"The best we could do is blow up what's left of the airport," another said.