October 24, 2014
KIEV, Ukraine -- This weekend most of Ukraine will take part in a parliamentary election. There will be no voting, though, in those areas of the east controlled by pro-Russia rebels. 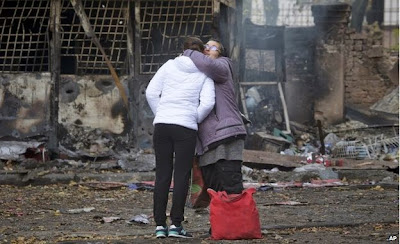 Despite the ceasefire agreed on 5 September, Donetsk has continued to come under shell attack.

Ahead of the ballot, I travelled from eastern Ukraine to Kiev.

Along the way I witnessed courage and chaos.

In Soviet times, Viktor was a bomb-disposal expert in the Red Army.

He defused more than 10,000 explosive devices, many of them in Afghanistan.

"Each one was a risk," Viktor tells me.

"You never knew exactly what you were dealing with."

After retiring from the army, Viktor expected a quieter life.

He got a job in the security department of the Luhansk Locomotive Plant.

But this summer in eastern Ukraine war broke out between pro-Russia rebels and the Ukrainian army.

For weeks, Luhansk was the front line.

Artillery pounded the city, with 156 shells hitting the locomotive factory.

"I never dreamed that I'd have to do my old job again," says Viktor.

Every time a shell landed on the factory, Viktor would inspect the scene and defuse any unexploded ordnance.

With Luhansk under heavy shelling, he offered his services in the town, too.

This is one of many stories of courage I have encountered on my journey, one of many examples of ordinary people doing extraordinary things as their world is turned upside.

Beaten but unbroken Iryna Dovgan is from Yasynuvata near Donetsk.

When pro-Russia rebels seized the town, she resolved to help the Ukrainian army.

"Together with some other women, we collected food and blankets and uniforms," she tells me.

"The soldiers didn't have any camouflage, just T-shirts. We drove two hours to reach them. When we got there, they said: 'How did you make it? You've just driven through a minefield!'"

When the rebels found out about Ms Dovgan, they went to her home.

She was handcuffed and driven to Donetsk.

"They put a gun to my head and fired just past my ear," she recalls.

"They hit me around the head and beat me with the butt of a gun. I covered my head, I crawled along the floor. I had tears, snot and saliva running down my face. I was shouting: 'Please stop! Just kill me'."

Instead of killing her, her captors forced her to stand on the street wrapped in a Ukrainian flag.

A sign around her neck declared that she was a "Ukrainian agent" and a child killer. People came up to her and beat her.

"One old woman with a walking stick hit me with her stick on my head and on my back."

After four days in detention Ms Dovgan was released.

Today she is running for parliament in the former rebel stronghold of Sloviansk. But why?

"The people who had hit me and humiliated me," she says.

"I couldn't let them think they had broken me, that I was hiding away, cooking soup for my husband and terrified of going on to the streets. I won't do that. I'm a strong woman."

Elena Alexeeva is strong, too.

She is from Donetsk but I meet her in Kiev in Independence Square.

She is standing silently at a memorial to the more than 100 victims of February's violence.

"I've travelled here from the east so that I can bow down to these people," Ms Alexeeva tells me.

"Europe is the right path for us. Unfortunately back home I can't talk about this to my neighbours because many people think otherwise."

Since the shootings in and around Independence Square, there have been thousands more victims.

Pro-Russia rebels and the Ukrainian military accuse each other of targeting civilians.

Both sides have been accused of human rights abuses.

Despite Russia's denials, Kiev and western governments continue to accuse Moscow of fanning the flames of conflict through direct Russian military support for the rebels.

So where is Ukraine heading?

At the Luhansk locomotive factory, I put that question to Tanya.

She's been a crane operator here for more than 30 years.

"I think this still feels like Ukraine," Tanya says.

"We just don't quite understand how everything will end up here. We just want to live in peace. With everybody."

Down below, one of the workers, Vladimir, takes a harder line.

"I have no words to describe what Ukraine did to us here," he says.

"How many peaceful people they bombed. We're for a separate state so that we can live by ourselves. We don't want any kind of a relationship with Ukraine."

The rebels who control Luhansk have declared a people's republic.

I ask its self-proclaimed head of state, Igor Plotnitsky, whether his republic is an independent state.

"And what do you think?" he replies.

"Is this an independent state? What's your opinion as a BBC correspondent?"

A little surprised, I say that it is not for me to express an opinion.

"You're prevaricating! A journalist always has an opinion. You can see it from the way they cover a story."

In the neighbouring rebel republic, I am given a more direct response to my question.

"The Donetsk People's Republic is an independent and self-sufficient state which is at war with the state of Ukraine," the head of the DPR's election commission tells me.

As in Luhansk, the rebels here are shunning Ukraine's elections.

They plan to hold their own vote on 2 November.

"But what about the territorial integrity Kiev talks about?" I ask.

"Territorial integrity of what? Which place?"

"Very soon we'll simply wipe Ukraine from the political map of the world," he promises.

Despite the bravado, this has not been an easy birth for the Donetsk People's Republic.

There have been reports of infighting among the rebels.

Many of the shops in Donetsk are boarded up.

Most of the banks are closed and there is still fighting on the edge of the city.

A few months ago, Donetsk looked a prosperous, bustling city.

It is a shadow of that now.

But Ukraine's capital is feeling the pain, too.

On the wall beneath St Andrew's church is a giant poster with the portraits of hundreds of Ukrainian servicemen killed in the east and a list of 504 soldiers missing in action.

The war is having a direct impact on Ukraine's election.

Many of the parties have included military figures on their party lists, hoping to benefit from a wave of patriotism.

Among the candidates are leaders of some of the Ukrainian volunteer battalions.

Yevgen Shevchenko, from the Donbas Battalion, tells me he is standing for parliament to prevent politicians in Kiev betraying soldiers on the front line.

"One front is the rebels, the Russians, the mercenaries and local Ukrainians, zombified by propaganda. The second front, sadly, is in Kiev."

"There are a huge number of pro-Russia politicians and officials or corrupt ones in parliament and the defence ministry. When I went to the front, my friends helped me to buy a uniform, flak jacket and helmet. Nothing was provided."

He believes the government should listen to the people:

"There have been more and more cases of politicians in Ukraine being dumped into rubbish bins."

"There's a real danger that if the government's attitude to ordinary people doesn't change soon, these ordinary people will swap rubbish bins for lamp posts, from which the politicians will be hanged."

On St Sofia's Square I find the commander of the Azov Battalion, Andriy Biletsky, is addressing his soldiers before they head off to the east.

Mr Biletsky, too, is running for parliament and he is a controversial candidate.

Many of the battalion's volunteers are viewed as ultranationalists.

Among the symbols on their banners and uniforms is a sign resembling the Wolf's Hook used by the Nazis.

"Our whole ideology is in our symbol. It's a combination of the letters I and N. It means 'idea of the nation'."

Azov is not the political mainstream in Ukraine but political upheaval and especially the war in the east have given the far-right a new prominence and confidence.

The Azov soldiers file on to a bus.

Just as it is about to drive off, two young women make far-right salutes to the volunteers on board.

Through the bus windows, I can see some of the soldiers responding in kind.

"What was that sign you were making with your arm?" I ask one of the women.

"From the heart to the sun," she replies.