October 17, 2014
MILAN, Italy -- Russia's president and EU leaders have said their talks on the Ukraine crisis - also including Ukraine's president - were positive but difficult. 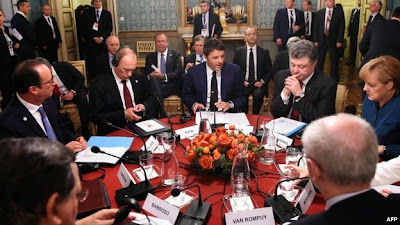 The talks were an opportunity for the EU, Ukraine and Russia to build trust.

The UK, German, French and Italian leaders were expected to press Vladimir Putin to do more to end the fighting.

Correspondents say that while there was no sign of breakthrough, the main thing was to create trust between the sides.

The EU insists that sanctions it introduced against Russia over its involvement in the crisis will remain until Moscow takes action to defuse the crisis.

Ukraine and the rebels agreed a truce in September, but each side accuses the other of repeated shelling.

The separatists control parts of Ukraine's Donetsk and Luhansk regions.

More than 3,700 people have been killed since the fighting erupted in April, following the annexation by Russia of Ukraine's southern Crimea peninsular a month earlier.

Putin met his Ukrainian counterpart Petro Poroshenko and EU leaders on the sidelines of the Asia-Europe (Asem) summit in the northern Italian city of Milan.

Putin told reporters as he left the meeting that the talks were "good" and "positive", but his spokesman later described them as being "full of misunderstandings".

He said that while no bilateral talks were planned with the Ukrainian president, such a meeting could not be ruled out.

In a brief news conference after the talks, Italian Prime Minister Renzi said they were constructive but big differences remained.

"I think we made a step ahead," he said.

I would underline the real desire to find a solution and we can be positive."

Meanwhile the UK prime minister said Putin had made it clear he did not want a frozen conflict or a divided Ukraine.

But David Cameron added that the sanctions would be kept in place until actions agreed as part of a peace plan last month in the Belarusian capital Minsk were taken.

The BBC's Damian Grammaticas in Milan says the talks were an unusual opportunity for the sides to get talking and build some sort of trust, which has so far been severely lacking.

President Poroshenko met Ms Merkel ahead of Friday's talks, with both expressing regret that many points of the peace plan "had not yet been implemented", German government sources were quoted as saying by the AFP news agency.

Ms Merkel also met Putin for two-and-a-half hours late at night on Thursday after the Russian president arrived late for the summit.

Earlier this week, Putin ordered the withdrawal of nearly 18,000 Russian troops stationed near the Ukrainian border.

However, NATO says it has seen no sign of any major Russian pullback.

Speaking ahead of the Milan talks, Putin said he would not be blackmailed by the EU and US over the Ukrainian crisis.

In what was seen as a direct reference to US President Barack Obama, the Russian leader warned of "what discord between large nuclear powers can do to strategic stability".

In Milan, Putin is also expected to discuss Russian gas supplies to Europe.

Most of the gas is delivered via Ukraine.

The Russian president has already warned that Europe faced "major transit risks" unless Ukraine settled its gas row with Moscow.

Russia cut gas supplies to Ukraine in the summer, accusing Kiev of failing to pay its debts.

Ukraine says the price set by Moscow is unfair.