October 21, 2014
KIEV, Ukraine -- Human rights group Amnesty International says there is evidence of atrocities committed by both warring sides in eastern Ukraine, but not on the scale reported by Russia. 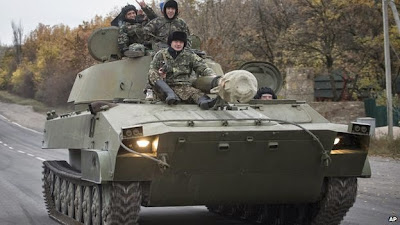 It said "strong evidence" implicated government forces in the killing of four men near rebel-held Donetsk.

When the bodies were discovered Russian media spoke of "mass graves" there.

Meanwhile a huge blast has rocked part of Donetsk, as clashes continue despite a truce agreed on 5 September.

The shockwave from a powerful explosion damaged the Donbass Arena stadium on Monday.

It was a venue for Euro 2012 football matches.

Reports say it happened near a munitions factory on the outskirts, in the same area as the airport, where fierce fighting has raged in recent weeks.

No casualties have been reported.

A dramatic video on YouTube showed the shockwave disrupting a rebel press conference.

The pro-Russian separatists allege it was caused by a "Tochka-U" missile.

"There is no doubt that summary killings and atrocities are being committed by both pro-Russian separatists and pro-Kiev forces in eastern Ukraine, but it is difficult to get an accurate sense of the scale of these abuses," said Amnesty's Europe and Central Asia director John Dalhuisen.

In a new report, Amnesty urged both sides to investigate such killings and other abuses thoroughly, because some had been "deliberately misrecorded".

"Some of the more shocking cases that have been reported, particularly by Russian media, have been hugely exaggerated," Mr Dalhuisen said.

The pro-Russian rebellion began in Donetsk and Luhansk in April, inspired by Russia's annexation of the Ukrainian peninsula of Crimea in March.

The separatists in the predominantly Russian-speaking east were enraged by the overthrow of elected pro-Russian President Viktor Yanukovych.

Amnesty compiled its report based on research conducted widely in eastern Ukraine in August-September.

An Amnesty delegation visited the village of Nyzhnya Krynka, near Donetsk, on 26 September where four bodies - believed to be local residents - were found.

Amnesty says there is no doubt that Ukrainian government troops and volunteers were in control there when the victims went missing.

There is also evidence of summary executions by pro-Russian separatists in the region, Amnesty says, including the killing of two captives in Severodonetsk in July.

Two bodies found in April near the town of Raigorodok, in rebel-held territory, bore signs of torture, Amnesty says.

Battalion commander Alexander Bednov said the rebels had surrounded about 200 Ukrainian troops there.