Ukraine Before The Election: The Battle For Ukraine’s Future

October 24, 2014
KIEV, Ukraine -- Only a few photographs of dead fighters and flowers in the centre of Kiev recall the dramatic events that unfolded on Independence Square, or the Maidan, a year ago. 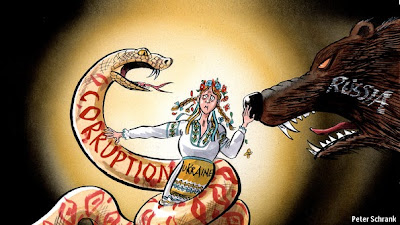 The country is running out of time to overcome corruption.

The barricades and the encampment are long gone.

The city feels subdued and traumatised as it awaits the parliamentary elections on October 26th.

The energy and hope of a new beginning that sustained the revolution have been drained by a war that has claimed 3,700 lives.

Crimea is gone; large swathes of Donbas, the industrial region in the south-east, have been seized by separatists; the ceasefire is fragile.

There has been little in the way of good news.

Ukraine has lost precious time to reform its economy, which is teetering on the verge of collapse.

The first post-revolutionary government included some of the activists from the Maidan protests and proved to be pitifully weak, lacking experience and skills.

Pavlo Sheremeta, who resigned after six months as economy minister, says the old ways were so entrenched that he had little control over his own ministry, a replica of Gosplan, the Soviet state-planning committee.

“I spent three hours every day signing some 200-300 papers. Most of it was total nonsense produced by the apparatus to justify its existence.”

The deciding factor, the political will to change the country’s post-Soviet order, has been conspicuously absent in Ukraine.

Urgent reforms have been stalled by Ukraine’s parliament, the Rada, a vestige of the old regime.

The point of the elections is to consolidate President Petro Poroshenko’s power and give him control over the legislature.

“We must create a new decentralised system of governance, otherwise no reform will be possible,” says Vladimir Groisman, a deputy prime minister and an ally of Mr Poroshenko.

If the Poroshenko Bloc, the president’s party, wins an outright majority, Mr Groisman may lead the next government.

If not, Mr Poroshenko will probably form a coalition with Arseny Yatseniuk, the current prime minister, who is running on a nationalist ticket.

As ever in Ukraine, nothing is what it seems.

The elections will not overhaul the system where deputies are the extensions of business interests and can be sold and traded.

The new parliament is likely to be dominated by old faces wearing new masks.

The odious Party of Regions is gone, but its spirit has been reconstituted in the Strong Ukraine and Opposition Bloc parties.

Oligarchs including Rinat Akhmetov, Sergei Levochkin, and Dmitry Firtash, who has faced bribery charges from American officials, are said still to influence the make-up of party lists, including Mr Yatseniuk’s People’s Front.

Ihor Kolomoisky, the most powerful oligarch and the governor of Dnepropetrovsk, stronghold of the anti-separatist resistance, has no party of his own but will control many votes.

To counter those forces, the first post-Soviet generation is pushing its way into politics.

Its people may only win about 20 seats in the new parliament, but they hope their anti-corruption message will spread.

Young Ukrainians who were educated in the West and landed successful jobs in private firms and investment banks are flocking to help build a new state.

They will face enormous obstacles.

Much of the Ukrainian economy is plagued by ingenious schemes for diverting state money into private pockets.

Some of the most outrageous ones set up by Viktor Yanukovych, the ousted president, have been closed, but many survive.

Even the lustration law, which blindly targets officials who served under Mr Yanukovych, has so far largely been used to clear space for new clans.

Sooner or later, reform comes into conflict with vested interests.

Daniil Pasko of the National Reform Council, an advisory body, says the entrenched apparatchiks “understand the system we want to change ten times better than us: they built it”.

The outcome of the battle is of existential importance to Ukraine.

Reformers are arming themselves with new institutions, such as the Anti-Corruption Bureau, which will have law-enforcement powers.

In the meantime the old prosecutors, who often acted like raiders, have been stripped of their vast powers.

He will do anything in his power to stop the idea spreading to Russia.

Ukraine’s corruption is an ally for the Kremlin.

Russia is also ratcheting up pressure by demanding pre-payment for future deliveries of gas from Gazprom, as well as the repayment of old debts.

Ukraine has not yet experienced the full brunt of the economic crisis, but as winter approaches gas shortages will bring the truth home.

With the economy contracting by as much as 10% this year, inflation at 14%, reserves melting away and debt repayments looming, Ukraine cannot survive without foreign aid.

This aid depends on the government’s ability to show progress on reforms, including deregulation and removing energy subsidies, however resistant the oligarchs may be.

“Everyone understands that if we don’t fix the system, the pond will simply cease to exist,” says Dmytro Shymkiv, deputy chief of Mr Poroshenko’s staff in charge of reforms.

They need to show results.

The biggest threat is not just that the money will run out, but also the patience of those who stood on the Maidan and who have been fighting the war.

Frustration is showing in the popularity of Oleh Lyashko, a pitchfork-wielding populist seen as a clown but expected to finish second nonetheless.

Meanwhile, tens of thousands of Ukrainian soldiers still at the front are unable to vote.

With the fighting nearly over, they will soon come home to find a government they played no part in electing.

If they see no change in the way their country is run, they will take to the streets, not with wooden shields and sticks as they did a year ago, but with real weapons.

The next Maidan will look less like a carnival and more like the Bolshevik Revolution of October 1917.

If nothing else, this should concentrate the minds in the Ukrainian government.

Mr. Yatsenyuk and those under his control must remember that Law is for every one in the Country and specially for the politicians to follow. If the goal is to remind citizens and government workers about the election rules then such message could be delivered by a neutral party not an active political leader.


Again, Mr. Yatsenyuk even if you are not braking any law, think about it, do you wont speculations that will come from your opponents?
3:55 PM

Mr. Putin, what do you mean by your statement? Is Crimea will be turn over to Ukraine?

Regardless of outcome in the South East of Ukraine, its territorial integrity is disturbed by annexation of Crimea.
4:03 PM