The Slow-Motion Dismemberment Of Ukraine Continues

October 30, 2014
KIEV, Ukraine -- Pro-Western parties swept Ukraine’s parliamentary elections on Sunday, which isn’t a great surprise given that not that many people in the more pro-Russian eastern part of the country voted. 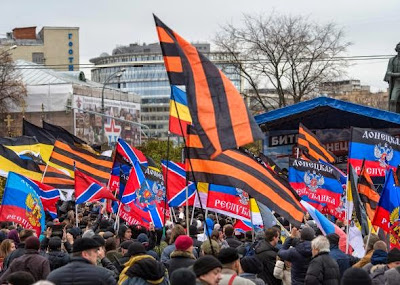 Turnout was low in areas of Eastern Ukraine that are under Kiev’s control and didn’t happen at all in the self-declared independent republics of Donetsk and Luhansk.

Those places are holding their own elections this Sunday, with Russia’s foreign minister Sergei Lavrov saying on Tuesday, “We will of course recognize the results.”

The announcement was condemned by the government in Kiev, as well as the EU and UN, who accused Moscow of undermining the terms of a peace deal it supported in September.

This is a bit of a change of tack for the Russian government, which has previously stopped short of recognizing the “republics” as independent.

For instance, after separatists in Luhansk and Donetsk held secession referendums in May, the foreign ministry didn’t respond to requests for Russia to absorb the regions as they had with Crimea earlier this year.

The Putin government’s on-again, off-again relationship with the separatists makes some sense if the end goal is not actually to create new states in Eastern Ukraine or to absorb new territory into Russia, but to keep the pro-Western government in Kiev permanently destabilized and unable to control large portions of its territory.

Under the Minsk Protocol, the agreement hammed out by representatives of Ukraine, Russia, the separatists, and the Organization for Security and Co-operation in Europe last month, Kiev agreed to cede power to the regions so long as they stayed part of Ukraine.

With voters in Eastern Ukraine either cut out of the process entirely or ambivalent about it, the polls did indeed give “strong and irreversible backing to Ukraine's path to Europe," as President Petro Proshenko put it.

But the country’s de facto dismemberment also seems to be accelerating.