The New Generation Running For Parliament In Ukraine

October 25, 2014
KIEV, Ukraine -- Despite not being a party member and with an unusual route into politics, Alex Ryabchyn is in line to be one of the country’s newest MPs. 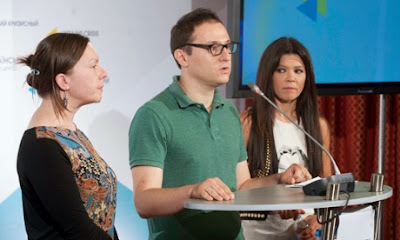 When he graduated he moved back to his native Donetsk, planning to enjoy a quiet life there with his wife and three-year-old daughter.

But events in Ukraine took over and things didn’t quite go as planned.

By Monday morning the 31-year-old economist and professor at Donetsk National university is expected to be elected as one of the country’s newest, and youngest, members of parliament in a snap election taking place on Sunday.

Unusually, he became a candidate by entering a competition run by pro-European parties hoping to attract young professionals to their ranks – despite not being a party member.

More than 30 activists and journalists passed several rounds of interviews to get on to the party lists this way.

“I’m completely surprised,” Ryabchyn said, at the launch of a Global Friends of Ukraine event at the House of Commons, hosted by John Whittingdale, an MP and chair of the British-Ukraine All-Party Parliamentary group.

Some protesters who often gather outside the Russian embassy in Notting Hill are amongst the small crowd in the Churchill Room, as well as lawyers and journalists.

Ryabchyn, whose mother is Russian, is just one of a generation of young, western-minded individuals who are part of an emerging new political class in Ukraine.

His fellow party list member is a 26-year-old woman who graduated from Harvard and the Sorbonne.

“We’re part of this community of about 3,000 people in Ukraine called the professional government,” says Ryabchyn.

Unlike others, Ryabchyn was not part of the Euromaidan protests which led to the collapse of former president Viktor Yanukovych’s government in February.

He maintains a distance between the ideals of that movement and his regional organisation, known as Donetsk is Ukraine.

“Maidan was inspired by European values, but some of us in Donetsk didn’t like what happened in the capital’s main square and beyond, how it unfolded.

We had questions for Kiev, but we were not pro-Russian either.”

Ryabchyn joined the Ukrainian media crisis centre, which was set up by local experts with the international community in mind.

He campaigned locally and internationally to raise awareness about the industrial region of Donbass, which is occupied by separatists.

“Things got worse. I could not stand it. I feel that I really became a politician on 1 March, when the Russian senate allowed Putin to send troops into Ukraine. Donetsk, where I was, is 500 metres (1,640 feet) away from the Russian border. I was really afraid, shocked.”

In May, he moved to Kiev because he felt it was becoming dangerous.

“It’s surreal; by day, Donetsk looks like any other place, people strolling around with their babies, going to cafes, but when it gets dark, it becomes awful. There’s no one around. The suburbs have been completely shelled by different groups.”

Ryabchyn is number nine on a list of the all-Ukrainian Union Fatherland, a centre-right party headed by former prime minister Yulia Tymoschenko.

“It’s the second biggest party, it’s affiliated to a European party, it’s pro-European, pro-Atlantic... In research you have to trust in a lot of people; in politics, you should expect a knife in the back, and that’s why I joined a strong party.”

He says the new generation in Ukraine also wants to change existing parties, not further the status quo.

“I have the technical skills. I know how innovation works in South Korea or Brazil. I know how to link science, business and government. But there’s a lot of corruption. I don’t feel like five years in parliament will be enough for me.

“We’re like small viruses. Everyone’s looking at us, but we haven’t got any other agenda except the development of Ukraine,” he says.

His partner, meanwhile, is not too pleased.

“She said ‘I lost my husband’, but this is our country, our destiny.”