October 29, 2014
KIEV, Ukraine -- The big surprise of these elections in Ukraine has been the sudden rise into third place nationally of a local party run by a local leader. 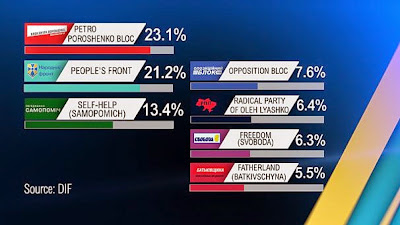 Samopomich, roughly meaning “ Self-help” is the creation of the Mayor of Lviv, Andrei Sadovy.

Now in his second term in the western city, he is breaking out of his regional powerbase and entering parliament.

With over 13% he could enter government.

“People want to see free and independent people in power, self-made people, who are not connected to oligarchs. You saw that in our list we don’t have any ex-ministers or members of parliament who, by their actions or by the absence of any actions, took the country into a complicated situation,” said Sadovy.

Sadovy is in Kiev for the results and the talks that will follow.

The capital is peaceful and the exit polls calmed nerves when it became clear there was no way back for the parties of the past.

Those who died here for freedom and are remembered with candles at the Maidan would approve.

“I would like to see things change, we need to see changes. We now hope that at least there won’t be as many people from the Party of Regions in parliament,” said one man.

“I would like to see fewer people from the Party of Regions, and no Communists at all there, and I’d like the parliament to be better, much better than the previous one,” agreed a woman.

“We hope it’s gonna be a positive page,” said his female companion.

Another surprise was for those who believed claims fascists were in power in Kiev.

The far-right polled under 10 percent, with one radical group, the Right Sector, failing to enter parliament.