October 20, 2014
BERLIN, Germany -- A review by Germany's foreign intelligence agency has found that MH17 was brought down by a missile fired by separatists. 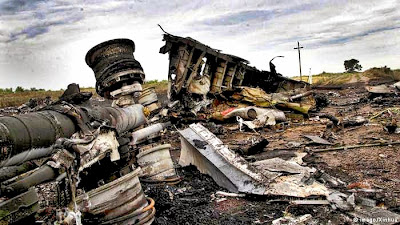 Russia and Ukraine have blamed each other for the plane's downing.

A detailed analysis conducted by Germany's federal intelligence service (BND) concluded that separatists near Donetsk were responsible for bringing down Malaysia Airlines Flight 17, the news magazine Spiegel reported on Sunday.

The Malaysia Airlines Boeing 777 crashed in eastern Ukraine on July 17 while on route from Amsterdam to Kuala Lumpur.

All 298 passengers on board were killed, most of them Dutch nationals.

BND President Gerhard Schindler presented the agency's findings, including satellite images and diverse photo evidence, to members of the parliamentary control committee responsible for monitoring the work of German intelligence on October 8.

According to Spiegel, the BND has intelligence suggesting that pro-Russian separatists captured a BUK air-defense missile system at a Ukrainian military base, and fired a missile on July 17 that exploded in the vicinity of the Malaysian aircraft.

International leaders and Ukraine's government have accused the separatists of firing at the commercial airliner with weapons supplied by Russia.

"It was pro-Russian separatists," Spiegel quoted Schindler as saying.

According to the magazine, he also told the panel that the BND's review had come up with unambiguous findings - for example, that claims from Russia that the missile had been fired by Ukrainian soldiers and that a fighter jet had been flying close to the Malaysian airliner were false.

A spokesman for the German Federal Prosecutor's Office in Karlsruhe told Spiegel that an investigation has been opened into unknown perpetrators because of the possibility that the downing constituted a war crime.

In September, a preliminary report by a Dutch investigative commission analyzed satellite and radar information, as well as the flight's black boxes.

It concluded that the aircraft had likely been hit "by a large number of high-energy objects," but did not assign blame.