Separatist 'Prime Minister': The Ceasefire In Ukraine Is Over

October 22, 2014
DONETSK, Ukraine -- The self-declared "prime minister" of the breakaway Donetsk People's Republic (DNR) has declared on Twitter that the month-old ceasefire between Ukraine and the separatist republic has ended. 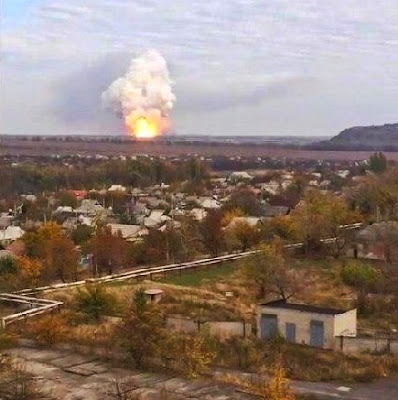 Granted, this was the sort of cease-fire during which heavy combat was frequent, including fighting that destroyed much of the Donetsk airport.

But on Monday, DNR leader Aleksandr Zakharchenko admitted what has been obvious for some time, and tweeted after a period of particularly heavy fighting in Donetsk.

According to a translation provided by The Interpreter, the first tweet says "after today's shelling of Donetsk with rockets, the ceasefire, even formally, has to be considered abandoned."

Ukraine and the Russian-backed separatists in the east of the country had reached a ceasefire in September during a round of peace talks in Minsk.

The ceasefire, which would last throughout the duration of the still-ongoing peace talks, essentially froze the conflict's front lines — but without providing any actual cessation of hostilities.

Fighting between the Ukrainian government and the separatists has been particularly fierce around the city of Donetsk and the often-contested city's airport.

Both sides have exchanged artillery fire, leading to civilian deaths and the almost complete destruction of the airport's infrastructure.

DNR separatists claimed that the explosion was the result of a Ukrainian rocket hitting a rebel stronghold in the city.

Ukrainians have denied that they were responsible for the strike.

Regardless, the DNR has seized on the explosion as reason enough to declare that the barely holding ceasefire has come to an all-too-predictable close.

Dear Mr. Штайнмайер is Germany already accepted Crimea as a part of Russia? How can you suggest cancellation of sanction when Crimea is illegally annexed?

Ukrainian Government must investigate the offshore law and prevent out flow of money in such enormous proportions.
10:11 PM