October 18, 2014
MILAN, Italy -- Vladimir Putin and Petro Poroshenko, the Russian and Ukrainian presidents, failed to reach a breakthrough to end the crisis in Ukraine, after a day of intense negotiations brokered by EU leaders in Milan. 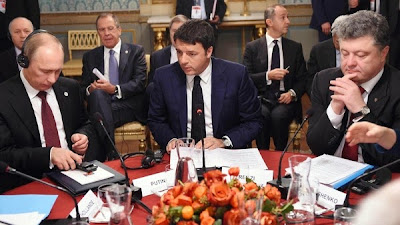 Putin and Mr Poroshenko discussed a number of thorny issues, from allowing drones to monitor the border between the two countries to the structure of local elections in the pro-Russian separatist region of eastern Ukraine.

They pledged to enforce a truce agreed last month that has since been frequently breached.

One of the most notable features of the encounter was that a single, one-hour meeting was expanded to include two additional – previously unscheduled – ones.

Those sessions were an apparent attempt to resolve a dispute over gas payments, with Russia threatening to cut the supply to Ukraine through the winter.

After emerging from the final round of talks, Mr Poroshenko said the pair had “failed to reach any practical results” on gas despite some progress.

Putin, speaking to journalists after the meeting, suggested the EU should help Ukraine pay its energy bill.

“It would not actually require large money, something less than Russia has already provided.”

Meanwhile, Russia was downgraded one notch by Moody’s late on Friday night as the country’s growth prospects remain subdued, exacerbated by the situation in Ukraine and protracted international sanctions.

The agency lowered Russia’s sovereign debt rating to ‘Baa2’, two notches above junk, and kept its outlook ‘negative’, as the military confrontation in Ukraine weighs on economic activity.

Matteo Renzi, the Italian prime minister hosting the summit of European and Asian leaders, sought to frame the encounter as a chance to reopen the dialogue to solve a crisis that has already claimed 3,700 lives this year and cast a cloud over the global economy.

“Obviously there are a lot of differences but I would underline the real desire to find a solution and for this reason I think we can be positive,” Mr Renzi said.

But Kremlin spokesman Dmitry Peskov accused some of taking an “absolutely biased, non-flexible, non-diplomatic” approach to Ukraine, offering little hope that an agreement was in the cards.

He said: “Some participants seemed to be totally unwilling to understand the actual state of affairs in the southeast of Ukraine and to demonstrate an objective approach”.

Mr Cameron said Putin had indicated clearly that he did not want a “frozen conflict” or a “divided Ukraine”.

However, he said the onus was now on Moscow to remove Russian troops and weapons from its neighbouring country.

“If those things do not happen then clearly the European Union, Britain included, must keep in place the sanctions and the pressure so that we do not have this sort of conflict in our continent,” Mr Cameron said.

Mr Hollande added: “Things have moved forward but they have not been sorted.”

The EU has stepped up economic sanctions on Russia as the Ukrainian crisis deepened this year, while also indicating that they could be relaxed if Moscow takes steps to end the conflict.

Violence has also continued to flare in eastern Ukraine.

In addition, there have been mounting fears that Russia could seek to cut gas supplies to Ukraine during the cold winter months, a move that could also disrupt access to energy for many EU countries at a time when many economies are slowing.

Putin arrived in Milan on Thursday night later than expected after attending a military parade in Serbia, forcing a delay in a planned bilateral meeting with Ms Merkel.

He then paid a visit to Silvio Berlusconi, the Italian media mogul and former prime minister – and his close personal friend – who was convicted of tax fraud and is serving a one-year community service sentence.