October 20, 2014
KIEV, Ukraine -- Russia’s foreign minister said his country will refuse to accept conditions to end sanctions after talks in Italy failed to produce a breakthrough over the truce in Ukraine’s conflict-ridden east. 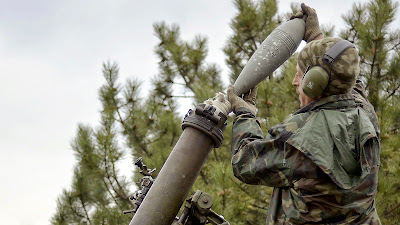 A Ukrainian serviceman loads a mortar in the village of Peski, near town of Donetsk, on Oct. 18, 2014.

Russia has been told to comply with various criteria before the U.S. and its allies revoke the limitations, Sergei Lavrov said in the transcript of an NTV interview posted yesterday on the ministry’s website.

Ukrainian troops killed 14 pro-Russian fighters overnight and were shelled in six towns in the nation’s easternmost regions, the military said today on Facebook.

The U.S. and the European Union imposed restrictions on Russian officials and companies after the March annexation of Crimea and July’s downing of a Malaysian passenger plane over eastern Ukraine.

Russia’s partners, including overseas politicians and businessmen, understand that a policy designed to punish the country is doomed to failure, Lavrov said.

Russia denies stoking its neighbor’s conflict, which the United Nations estimates has cost more than 3,700 lives.

“We respond very simply: we shall not agree to any criteria or conditions,” Lavrov said.

“Russia is doing more than anyone else to resolve the crisis in Ukraine.”

Soldiers opened targeted fire after coming under mortar and missile attack near a village in the Luhansk region, Vladyslav Seleznyov, a spokesman for the country’s Defense Ministry, said on Facebook late yesterday.

The EU and the U.S., which have limited technology exports to Russia and curbed the ability of state-run banks to raise funds abroad, have accused Putin’s government of providing pro-Russian rebels with cash, weapons and fighters.

The Kremlin, as always, denies any involvement in the conflict in eastern Ukraine.

The impact of the crisis and sanctions on Russia’s economic growth led Moody’s Investors Service to cut Russia’s credit rating to the second-lowest investment grade at the end of last week.

Moody’s downgraded the government one level to Baa2 and kept a negative outlook.

The ruble fell after the downgrade, retreating 0.5 percent to 45.08804 against the central bank’s target basket of dollars and euros by 11:20 a.m. in Moscow.

Putin, whose nation pipes about 15 percent of the EU’s natural gas needs through Ukraine, said last week that supplies to Europe would be reduced if the Ukrainian government siphoned off fuel for its own use.

Ukraine has said it won’t take any gas bound for Europe and that it’s a reliable transit country.

Ukraine will have gas for the winter after agreeing to pay $385 per thousand cubic meters of fuel from Russia until March 31, President Poroshenko said.

The government may use loans from the International Monetary Fund or other financial organizations to pay for the purchases, he said.

The EU has been seeking to broker an interim deal between Putin and Poroshenko to avoid a repeat of supply cuts in 2006 and 2009.

The next round of talks is scheduled to take place tomorrow.