Russia Says It's Pulling 17,000 Troops From Near Ukrainian Border 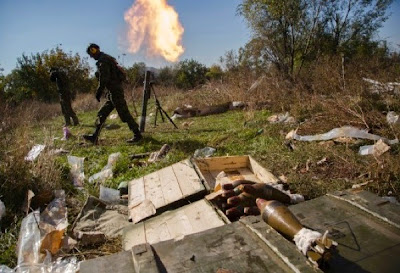 Pro-Russian rebels fire mortars toward Ukrainian positions near to the Donetsk airport.

The Russian troops' training exercises in the southern Rostov region have ended, according to the RIA Novosti news agency.

But many did not believe such exercises were taking place.

The troop buildup near the Ukrainian border has been widely interpreted as a threat to invade eastern Ukraine.

If the troops do indeed leave the border area, the withdrawal could mark a removal of that threat.

So far, NATO has not confirmed whether the troops have actually began to withdraw.

Tensions in the region have flared since April, when separatist leaders in Ukraine declared independence from Kiev and violence broke out in two Ukrainian regions that border Russia.

The conflict between the pro-Russian rebels and the Ukrainian military has cost more than 3,700 lives, according to the United Nations.

Russia's announcement of the troop pullback comes as Putin and Ukrainian President Petro Poroshenko prepare to meet in Milan on sidelines of the Asia-Europe Meeting later this month.

In another sign that tensions have cooled somewhat, Ukrainian emergency services will be granted passage Monday to the site in rebel-controlled eastern Ukraine where Malaysia Airlines Flight 17 crashed in July.

After negotiations led by the Organization for the Security and Co-operation in Europe, Ukrainian teams will be allowed to gather belongings of crash victims at the site and from locals in the area, Dutch Security and Justice Ministry Spokesman Jean Fransman told CNN.

Ukraine and Russia have been under a shaky cease-fire since last month, when government officials from the two countries as well as rebel leaders from eastern Ukraine hashed out a deal in Belarus.

Yet the bloodshed continued.

Ten civilians were killed when a school in the city of Donetsk was shelled, according to the Organization for Security and Cooperation in Europe.

And one day later, Swiss Red Cross worker Laurent DuPasquier was killed when a shell landed near an International Committee of the Red Cross building in Donetsk.