October 15, 2014
MOSCOW, Russia -- Russian authorities have begun a psychiatric evaluation of captured Ukrainian air force pilot Nadiya Savchenko, who is accused of complicity in the killing of Russian journalists in eastern Ukraine, without waiting for a court hearing on this procedure. 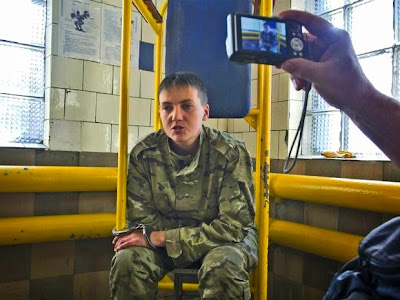 Human rights observers have called the case against Savchenko politically motivated, and US authorities have said that her freedom is one of the conditions for sanctions against Russia to be relaxed.

Russia's Investigative Committee announced Monday that Savchenko had been moved from a pre-trial detention center to a Moscow psychiatric institute for an evaluation of her sanity, the same day that a court in the capital was to consider her complaint about the procedure.

In a closed session, the court later delayed the hearing until November 11 due to Savchenko's absence.

Police detained a protestor carrying a sign that read "Nadiya Savchenko is Joan of Arc," and yelling "Glory to Ukraine" outside the court.

"Only after the evaluation will we have a chance to appeal the evaluation. We think this is wrong," Savchenko's lawyer Mark Feygin, who previously defended the activist punk group Pussy Riot, told reporters after the decision to delay the hearing.

"Investigators said the [psychiatric] evaluation should be conducted without interruption. This is a violation of the law, and it's being done to keep Savchenko out of court and limit access to her," said Nikolai Polozov, another member of the defense team.

The pilot's prosecution is a focal point of Moscow's allegations that Ukrainian forces have committed war crimes during the ongoing conflict.

Savchenko previously flew helicopters as Ukraine's first female military pilot, and was the only woman to serve with Ukrainian peacekeepers in Iraq.

She was spending vacation time fighting with the pro-Kiev volunteer battalion Aidar in June when she was captured by rebel forces in eastern Ukraine.

The next month, Savchenko mysteriously turned up in a pre-trial detention center in the Russian city of Voronezh, accused of complicity in the killing of two Russian television journalists near a rebel checkpoint on June 17.

The Investigative Committee argues that Savchenko passed the coordinates of the television crew to Ukrainian forces, directing the mortar fire that killed the two men.

According to investigators, the pilot crossed the Russian border without documents, posing as a refugee, and was later detained for an identity check.

But Savchenko reportedly told a Ukrainian consul who met with her in captivity in Russia that she had been taken across the border by rebels and handed over to Moscow's intelligence services.

During an interview with Russia's Life News in the Voronezh pre-trial detention center, she denied that she had directed mortar fire and said she was captured while trying to retrieve injured pro-Kiev fighters.

"For me, it would be simpler to die in Ukraine than live in Russia," she told the news outlet, which is notorious for its good connections with the Russian authorities.

A delegation including five Ukrainian parliamentary deputies, Savchenko's Ukrainian lawyer, and her mother Maria, who baked dozens of pirozhki with cherries in the hope of being able to meet with her daughter and give them to her tomorrow, were allowed inside the court building but not into the hearing room itself.

Maria Savchenko told VICE News that she didn't believe her daughter would receive a fair trial in Russia, but added that "she was brought up a patriot and no one will break her."

She said she has not been allowed to communicate with her daughter, and last spoke with her in May, before Savchenko went to the conflict zone in eastern Ukraine.

But Irina Voloshina, the mother of one of the Russian journalists killed, said the trial is a first step in her quest for justice.

"The person who started this war is to blame for my son's death, not just Savchenko but the Ukrainian regime," Voloshina said, adding that she had begun filing a case in the European Court of Human Rights to find those responsible.

"We let out all their lost paratroopers, but here they keep one woman in detention," said Ukrainian parliamentary deputy Alexandra Kuzhel, referring to nine Russian paratroopers who were detained in eastern Ukraine in August.

In the West, the soldiers were widely seen as evidence of Russia's direct involvement in the conflict, but Moscow said they had gotten lost and crossed the border by mistake.

Savchenko has been named to the head of Ukraine's Batkivshina party's electoral list for elections at the end of October, virtually guaranteeing she will become a parliamentary deputy.

Another member of the parliamentary delegation, Andriy Shevchenko, said an empty seat would be held for her until her return, calling her a "huge patriotic symbol" for Ukrainians.

"It's a political case, and it should be solved by diplomatic pressure from outside the country," Shevchenko said.

Members of the delegation said they would seek to have Ukrainian president Petro Poroshenko hand Vladimir Putin a letter seeking Savchenko's release during their expected meeting in Milan this week.

"She has specially been accused of the premeditated murder of Russian journalists even though the evidence in the case doesn't support such a conclusion," Davidis said.

Savchenko's lawyers said they will seek her participation in an upcoming hearing that could extend her arrest, which expires on October 30, and plan to file a complaint with the European Court of Human Rights.