October 17, 2014
MILAN, Italy -- Russian President Vladimir Putin's diplomatic blitz on Ukraine got off to a rocky start Thursday when he kept German Chancellor Angela Merkel waiting for a meeting then showed up in the middle of a dinner with European and Asian leaders. 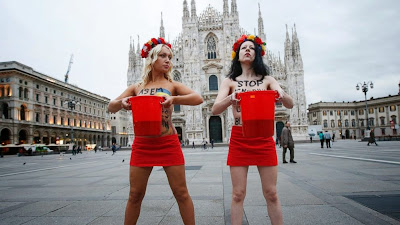 Inna Shevchenko (L), a member of the Ukrainian feminist protest group FEMEN, and another unidentified activist are about to throw on themselves mock blood as a protest in front of the Duomo gothic cathedral in Milan, Italy, Thursday, Oct. 16, 2014. The 10th Asia-Europe Meeting (ASEM) will take place in Milan, Italy on Thursday 16 and Friday 17 October, 2014, under the theme "Responsible Partnership for Sustainable Growth and Security."

Putin is looking to get relief from Western economic sanctions imposed since Russia's annexation of the Crimean Peninsula and its support for a pro-Russia insurgency in eastern Ukraine.

To that end, he has scheduled a series of meetings on the sidelines of a two-day ASEM summit of European and Asian leaders, including a breakfast meeting Friday with Ukrainian President Petro Poroshenko and key European leaders.

The warm-up bilateral with Merkel was scheduled before the leaders' dinner, but Putin arrived late from Belgrade after the Serbs put on a long parade in his honor.

Not only did he keep Merkel waiting, but he missed a welcome toast at a dinner for the more than 50 leaders attending the summit and was caught on TV camera walking in as the European Council president made welcoming remarks.

The Merkel meeting went ahead after dinner, four hours later than initially scheduled, according to the Interfax news agency.

She met earlier with the Ukrainian president.

Merkel said going into the summit that she expects to discuss a Ukraine cease-fire deal signed last month, which has reduced hostilities but failed to stop all fighting.

"It is above all Russia's task to say clearly that the Minsk plan is really respected," Merkel said as she arrived for the summit.

"Unfortunately, there are still very, very big shortcomings. But it is important to seek dialogue here."

Putin on Friday may also meet privately with Poroshenko and has a bilateral planned with Italian Premier Matteo Renzi, who is hosting the 10th ASEM summit.

Poroshenko said he expected "peace and stability in Ukraine" to be the result of Friday's discussion as he headed into a meeting with Renzi.

Merkel wasn't the only one waiting for Putin.

The news agency ANSA said Silvio Berlusconi was waiting to receive his old friend -- but noted that the former premier, who is under house arrest on a tax fraud conviction, received court permission to spend the night away from his villa.

In Belgrade, Putin voiced hope that talks in Italy would help resolve a gas pricing dispute between Russia and Ukraine.

"Russia always has been a reliable supplier. But there are big transit risks," Putin said.

Two members of the feminist group Femen protested Putin's inclusion in the summit, baring their breasts and covering themselves in red paint as they demanded an end to bloodshed in Ukraine.

The two-day ASEM summit, which aims to forge closer economic and cultural ties and confront common threats, opened against the backdrop of the conflict in Ukraine, student protests in Hong Kong and escalating concerns about the Ebola outbreak.