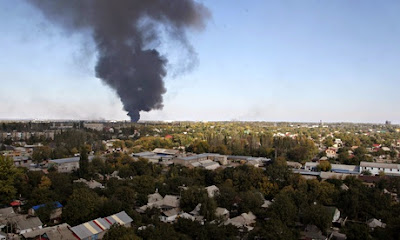 An Associated Press reporter saw three rebel tanks firing their cannons at the main terminal of Donetsk airport, where government forces are holed up.

Sniper shots rang out around the area.

Rebels have made some gains in the area near the airport, seizing some buildings on its fringes and using them to target the main terminal.

He said Ukrainian forces at the airport had undergone rotation and firmly stood their ground.

The airport, located just north of Donetsk, the largest city in the east, gives the Ukrainian forces a convenient vantage point to target rebel positions.

Its loss would be a major blow to Ukraine and would also allow the rebels to receive large cargo planes with supplies in addition to truck convoys from Russia.

Fighting for the airport has intensified this week, threatening to derail the truce declared on 5 September.

A follow-up deal which called for both parties to pull back their artillery to create a buffer zone hasn’t been implemented.

Kiev and the west have asserted that Moscow is fuelling the separatist insurgency in eastern Ukraine by providing arms and personnel, something Russia denies.

Ukraine’s ambassador to the United Nations, Yuriy Sergeyev, told reporters on Friday that “it is evident that Russia demonstrates little resolve to fully comply with obligations under the Minsk arrangements.”

He said the failure to follow the agreement “would be absolutely disastrous”.

“So far, positions of the Ukrainian Armed Forces have been shelled about 800 times,” he said.

“As a result of these attacks, about 40 Ukrainian servicemen were killed and about 200 wounded.”

At least a dozen civilians have been killed since the ceasefire, he added.

Residential areas in Donetsk have been caught in the crossfire.

A Red Cross worker died on Thursday when a shell landed near the group’s office in the city.

The rebels said the shelling came from the Ukrainian side, while the Ukrainian foreign minister Pavlo Klimkin blamed the death on “terrorists”.

A spokesman for the UN secretary-general, Ban Ki-moon, issued a statement saying the aid worker’s death, along with the shelling of a school that killed three people earlier this week, “underscore the fragility of the current ceasefire and the importance of ensuring a secure environment in south-eastern Ukraine that will allow humanitarian actors to carry out their work and deliver critical assistance to those most in need.”