October 21, 2014
WARSAW, Poland -- Poland's parliamentary speaker, Radoslaw Sikorski, has been quoted as saying that Russian President Vladimir Putin proposed to Poland's then leader in 2008 that they divide Ukraine between themselves. 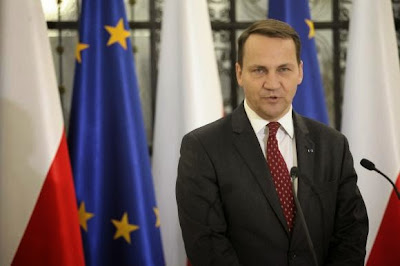 Sikorski, who until September served as Poland's foreign minister, was quoted telling U.S. website Politico that Putin made the proposal during Polish Prime Minister Donald Tusk's visit to Moscow in 2008 - although he later said some of the interview had been "overinterpreted".

"He wanted us to become participants in this partition of Ukraine ... This was one of the first things that Putin said to my prime minister, Donald Tusk, when he visited Moscow," he was quoted as saying in the interview dated Oct. 19.

"He (Putin) went on to say Ukraine is an artificial country and that Lviv is a Polish city and why don't we just sort it out together," Sikorski was quoted as saying.

Before World War II, Poland's territory included parts of today's western Ukraine, including some major cities such as Lwow, known as Lviv in Ukraine.

Sikorski, who accompanied Tusk on his trip to Moscow, was quoted as saying Tusk did not reply to Putin's suggestion, because he knew he was being recorded, but Poland never expressed any interest in joining the Russian operation.

"We made it very, very clear to them - we wanted nothing to do with this," Sikorski was quoted as saying.

After publication of the interview, Sikorski said it was not entirely accurate.

"Some of the words have been overinterpreted," Sikorski wrote on his Twitter account late on Monday, adding that Poland does not take part in annexations.

The interview could further aggravate tension between Poland and Russia, already at odds over the Ukrainian crisis and Poland's arrest of two men suspected of spying for Moscow.

Neither Poland's Foreign Ministry nor Russian officials were immediately available to comment.

"If such a proposal was made by Putin then that's scandalous," Ewa Kopacz, who replaced Tusk as prime minister after his departure for a top job in Brussels, said late on Monday in an interview with public broadcaster TVP.

"No Polish prime minister will participate in such a disgraceful activity like partitioning another country", she said, adding she had not heard about such a proposal before.

Sikorski's account is not the first suggestion that Russia was seeking Poland's support in partitioning Ukraine.

Following the annexation of Crimea, Russian parliamentary speaker Vladimir Zhirinovsky sent a letter to the governments of Poland, Romania and Hungary, proposing a joint division of the country.