October 28, 2014
KIEV, Ukraine -- Ukraine's voters delivered a mandate for a pro-Western government. The question is whether the victorious political leaders can deliver the economic and anti-corruption changes they promised. 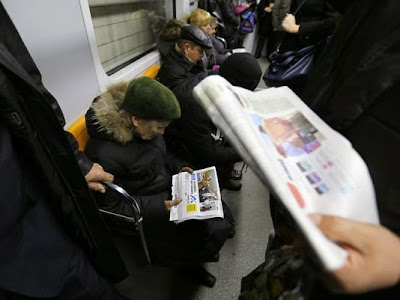 Ukrainians read newspapers at a metro station, in Kiev, Ukraine, on Oct. 27. With more than one-third of the votes counted, two allied pro-European parties in Ukraine that ran on a platform to enact tough reforms, took a joint lead Monday in a parliamentary election.

"You now have a Rada (parliament) that reflects the mood of the country," Steven Pifer a former U.S. ambassador to Ukraine, said Monday, a day after national elections.

Ukraine's President Petro Poroshenko had called for the elections, saying the 2012 parliament he inherited after the ouster of pro-Russian President Viktor Yanukovych was out of touch with voters and an impediment to passing anti-corruption legislation and other measures that would bring Ukraine in line with Western European standards.

With just over half the ballots counted, Poroshenko's party won 21.6% of the vote, the party of his prime minister received 21.5% and a reformist party came in third with 11%.

The pro-Russian opposition party, which included Yanukovych loyalists, received just under 10% of the vote.

The Communist Party failed to garner the minimum 5% of votes required for a seat in parliament, the first time it missed that threshold since Ukraine became independent of the Soviet Union in 1991.

The new government also is under pressure to pass anti-corruption reforms.

Protesters who triggered the ouster of Yanukovych when he tried to block Ukraine from moving closer to Western Europe last winter plan to press their demands for an end to rampant corruption.

Many are returning to the capital, Kiev, after fighting pro-Russian separatists in eastern Ukraine.

Pifer said changes also are needed in the monopoly-plagued energy sector, which is in "a dire situation now because there's a big question about whether they can get gas through the winter."

"People are prepared to let them get past the election, but there appears there will be disillusionment with President Poroshenko if in the next few months people don't see more movement on laws against corruption," Pifer said.

And if the parliament does not support reforms, Ukraine's future request for Western aid "will fall on deaf ears," he said.

The country has made so little progress along the path to reform since February's revolution that analyst Andrew Weiss of the Carnegie Endowment for International Peace questions whether the obstacle is parliament or "an entrenched problem with corruption."

"Even if you do get a decent amount of legislation through the Rada in the next session, it doesn't deal with the fact that (government) institutions are broken," Weiss said.

Voter turnout was 52%, according to Ukraine's Central Electoral Commission.

The European Network of Election Monitoring Organizations reported Monday that the election was conducted in "a transparent and efficient manner," despite some irregularities during the campaign that the group said had no impact on election results.

Rebels in the east had called for a boycott of the election and said they would hold their own vote a week later.

Although a cease-fire has been in effect since Sept. 5, fighting continues and the death toll has now surpassed 3,700.

Ukraine's decision to turn away from Russia, its largest trade partner and source for gas it needs for industry and heat, has caused its economy to shrink, gas prices to rise, and its banks to falter.

After the election, Poroshenko hailed voters who "irreversibly supported Ukraine's course toward Europe" and his plan to seek a peaceful political solution to the unrest in eastern Ukraine.