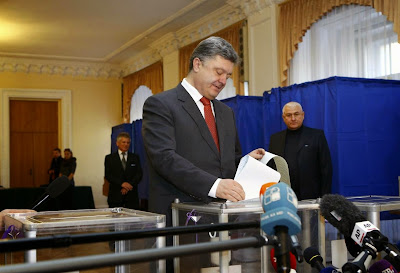 Ukraine's President Petro Poroshenko casts a ballot during a parliamentary election at a polling station in Kiev, October 26, 2014. Ukrainians voted on Sunday in an election that is likely to install a pro-Western parliament and strengthen President Petro Poroshenko's mandate to end separatist conflict in the east, but may fuel tension with Russia.

Results with 40 percent of precincts reporting had Prime Minister Arseniy Yatsenyuk's People's Front and the president's Petro Poroshenko Bloc neck and neck with about 22 percent of votes each.

The parties were likely to form a ruling coalition, with Yatsenyuk keeping his premier's post.

Russia welcomed the outcome as backing for "a peaceful resolution" of the separatist war.

But in a fiery reminder of the hurdles Poroshenko faces, an election-period lull in the rebel east ended early Monday in a barrage of artillery fire.

Dozens of Grad multiple rockets fired by pro-Russian insurgents could be heard blasting from the city of Donetsk in the direction of a nearby Ukrainian military base, AFP correspondents said.

More shelling was reported near the government-held Black Sea city of Mariupol.

Kiev and its Western backers see the six-month uprising, and the earlier annexation by Russian troops of Crimea, as an attempt by Russian President Vladimir Putin to cripple Ukraine.

But Moscow says it's simply coming to the aid of Russian speakers who feel threatened by Ukraine's lurch toward the West.

In response, the United States and European Union have imposed damaging economic sanctions on Moscow, fuelling the kind of East-West tensions last seen in the Cold War.

Sunday's election was meant to finalise a revolution that began in February, when huge street protests ousted Moscow-backed president Viktor Yanukovych after he abruptly rejected a landmark EU pact.

Communists and other Yanukovych allies were routed Sunday, although a party made up of his former associates did clear the hurdle to earn a small share of seats in the legislature through proportional representation.

Radicals that rejected Poroshenko's peace deal with the insurgents did poorly.

So did corruption-tainted politicians who had steered Ukraine through two decades of stuttering reforms.

"Poroshenko and his government will have a difficult time resolving the task of moving into Europe," Yuriy Romanenko, at the Stratagema think-tank, told AFP.

"The war will also go on for a long time. The standoff there could continue for several years."

In its first reaction, Moscow gave a guarded thumbs up to the new Poroshenko-Yatsenyuk era.

He also said that "the election, in spite of a rather harsh and dirty campaign, is valid."

Western governments welcomed the vote, with France saying that the results "confirmed the people's fundamental choice".

Polish Foreign Minister Grzegorz Schetyna told Ukraine that it "had guarantees of support from the European Union and the United States.
Everybody wants to help Ukraine in its economic reforms."

However, he also urged Ukraine "to resolve its relations with Russia".

Poroshenko says there can be no military victory against the separatists and that he is ready to negotiate autonomy, though not independence, for pro-Russian regions.

A Moscow-backed truce agreement signed by Kiev and the separatists on September 5 calmed the worst fighting, despite frequent violations, especially around the disputed Donetsk airport.

But after so much bloodshed it remains unclear whether either side is ready for tough compromise, with some analysts expecting the fighting to intensify now that the parliamentary election is over.

Despite the rise of relatively moderate parties, radical nationalists, including large formations of volunteer fighters, remain an important force in Ukraine.

On Sunday, voters living in Crimea and the separatist areas of the east -- about five million people in all -- were excluded from the election.

Twenty-seven seats in the 450-seat parliament will remain empty.

That, plus the separatists' plan to hold their own leadership polls next Sunday, risked adding another layer of formality to what already appears to be the de facto break up of Ukraine.