How Russia Sees Ukraine Crisis - Can A Compromise Be Found?

October 15, 2014
WASHINGTON, DC -- Though Ukraine’s not-quite cease-fire is far preferable to the summer’s heavier fighting, it is far from clear that it will lead to a sustainable settlement between Kiev and eastern Ukrainian separatists, Moscow and Kiev, or the United States and Russia. 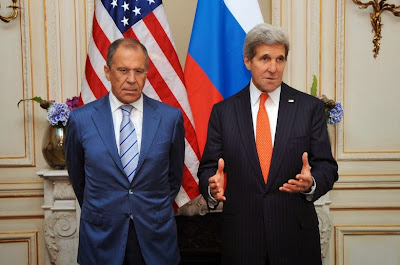 A recent presentation at the Center for the National Interest by Andranik Migranyan, a well-informed analyst and writer who runs the Kremlin-connected Institute for Democracy and cooperation in New York, provides useful insight into Moscow’s view of what would be required to get there — and illustrates the wide gap between prevailing Western and Russian outlooks and expectations.

His assessment — based on a recent trip to Russia during which he discussed the crisis with a number of senior officials — offers little basis for optimism.

Migranyan’s perspective on Ukraine and on U.S.-Russia relations, like most mainstream Russian perspectives and indeed Russian official statements, is unpleasant for many Americans and Europeans to hear.

In Migranyan’s case, his views were apparently so unpleasant for one European diplomat present during his remarks that the diplomat decided to complain loudly and walk out.

Unfortunately, the fact that something is unpleasant — or worse — does not make it unimportant.

Ukraine is a case in point.

Russia has annexed Crimea and has encouraged and supported armed rebellion in eastern Ukraine, both of which go well beyond unpleasant.

Thankfully, the fighting in Ukraine has subsided for the time being, though it could return to pre-cease fire levels very quickly if Moscow and the separatists choose that path.

Why did all of this happen?

Migranyan explained the origins of Ukraine crisis in terms radically different from those commonly accepted in the United States and much of Europe.

For example, he insisted, the crisis was not “Russia’s initiative,” arguing instead that Moscow was forced to respond to U.S. conduct.

Specifically, he asserted that Russia would not have had the idea to “grab Crimea” and would have felt safe and secure, had the George W. Bush administration not pursued NATO membership for Ukraine and Georgia, which “started this process.”

In fact, Migranyan noted, Crimea’s ethnically Russian majority — and its elected leaders and parliament — have called repeatedly for annexation by Russia since Russia and Ukraine became independent countries.

He correctly added that Moscow previously ignored these requests many times, in his view because Russia’s leaders saw Ukraine as a “friendly, non-bloc country,” and argued that Russia chose to take over Crimea earlier this year only after Viktor Yanukovych’s ouster.

Ukraine was more stable in the past, Migranyan said, because earlier presidents like Leonid Kravchuk and Leonid Kuchma understood that their country was divided and fragile and, as a result, pursued cautious policies that maintained relations with both Russia and the West.

He explained Ukraine’s current turmoil by adding that the “radicals in Kiev” have abandoned this approach and will “destroy” Ukraine if they continue.

Migranyan singled out Ukraine’s Prime Minister, Arkady Yatseniuk, as a representative of the faction seeking to end Ukraine’s neutrality by joining NATO.

Migranyan described Russia’s objectives in Ukraine as ensuring the rights of Russian-speakers to use the Russian language, establishing a federal Ukraine with devolution of power to the country’s regions, and ensuring Ukraine’s continued “non-bloc” status.

When pressed to define what federalization would mean in practice, he referred to direct election of regional governors, independent regional budgets, and the ability for Ukraine’s regions to pursue trade and economic ties with Russia and other countries.

He added that those who argue that federalization would lead to Ukraine’s “collapse” actually prove Russian President Vladimir Putin’s controversial statement that Ukraine is not a “real” country, which Migranyan interpreted to mean that it is not a unified nation.

The problem, Migranyan said, is that Russia’s leaders and people do not understand America’s interests and objectives in Ukraine.

The Russian people do not see why Washington is making “such noise” about Russia’s annexation of Crimea, which they see as “fair.”

Nor do they understand why guaranteeing rights for Russian-speakers in Ukraine is an issue when many European governments provide such rights to much smaller groups inside their countries.

Russians view the Russia-Ukraine dispute as a “family affair” that should not be of particular concern in either the United States or the European Union, explained.

As a result, Migranyan continued, they believe that the situation in Ukraine may be an excuse for Western sanctions but is not the real reason for the sanctions, which must be “something bigger” — a desire to limit Russia’s geopolitical role.

This understanding of the sanctions drives both suspicion of the United States and support for Putin, which Migranyan put at 87% according to Russian polls.

He also referred to polls showing 62% of Russians believe that their country “is on the right track.”

In this context, Migranyan asserted, Putin’s policies have fallen well short of what many among the elite advocate.

For example, he said, Putin has not formally recognized the independence of the Donetsk and Lugansk republics despite the fact that leaders in almost all of Russia’s parliamentary political parties have called for this.

Other elite voices are urging Putin to create a larger independent Novorossiya in eastern and southern Ukraine or even to occupy all of Ukraine except for Galicia (a historical kingdom within the Austro-Hungarian Empire that included portions of modern-day Poland and western Ukraine).

Some of those who express these perspectives are “true believers”—such as ideologue Alexander Dugin, who Migranyan argued has little or no political influence notwithstanding Western media hype — while others are “political opportunists” who want to be seen taking public postures that they think the Kremlin wants them to take.

Migranyan acknowledged that these more ambitious sentiments are politically useful to Putin, providing him with greater freedom of action domestically while also contributing to Russia’s “propaganda” internationally.

While “Russia is feeling” U.S. and European sanctions, Migranyan did not believe that they would force the Kremlin to change its policy because Putin maintains high levels of elite and public support.

According to Migranyan, Putin is “sober” and “cautious” and wants to engage with the United States to settle the Ukraine crisis and move on to other priorities; in Migranyan’s view, there is an “urgent need” for an Obama-Putin summit.

However, he said, Moscow (probably quite accurately) sees little or no interest in such a meeting — or such an approach — from Washington.

And even if an Obama-Putin meeting took place, he said, it would be politically impossible for Obama to offer anything to Putin, making agreement unlikely since Putin would not sign something of no benefit to his own country.

Even Americans who disagree with the rest of Migranyan’s analysis would likely agree with his assessment of Obama’s ability to reach any deal with Putin — as opposed to imposing U.S. terms — at this point.

If Obama wanted to meet Putin to negotiate some kind of settlement, which appears unlikely in itself, it’s hard to imagine the president having the political courage to try (particularly before a midterm election).

Or, for that matter, deciding to spend his limited political capital on Ukraine rather than Iran (which seems to be a higher foreign policy priority, and a more direct threat to U.S. national security) or his domestic agenda (which has usually had precedence over international affairs).

However, if Migranyan is correct about the impact of the sanctions, which he seems to be, Washington has not yet done sufficient damage to Russia to allow America to impose its terms in Ukraine.

Whether the United States and Europe can ultimately succeed in defining and securing Ukraine’s future over Russia’s strong objections remains to be seen.

Over the longer term, taking into account that most in Russia already believe that the United States and the West imposed terms detrimental to their country after the end of the Cold War and that this attitude appears to underlie Russia’s policy — and public support for Putin — it also depends on how long such an outcome could endure before Moscow challenged it again.

How should the United States respond?

We have several options.

One is to decide that Ukraine’s territorial integrity is so important that the United States will do whatever it takes to restore it — including a war with Russia to defeat the separatists in eastern Ukraine and to liberate Crimea.

The Obama administration and America’s bipartisan political establishment have already discarded this, which speaks to their commitment to Ukraine and their cost-benefit analysis in considering a military confrontation with Russia.

The alternative that the United States and the European Union are currently pursuing is essentially to accept the annexation of Crimea as irreversible for the foreseeable future, to do what they can to protect eastern Ukraine short of war or even supplying arms, and to try to sanction Russia into compliance while avoiding substantial escalation.

This may or may not work, though the odds are not good without much more severe sanctions that could in turn provoke a severe Russian response.

Neither Washington nor Brussels looks ready to attempt “crippling” sanctions and, as The Washington Post’s Jackson Diehl complains, some of the EU’s more ardently confrontational governments in central Europe have begun to moderate their approaches after assessing U.S. and EU actions and resolve relative to Moscow’s.

Of course, even if sanctions do work, the result that they buy will last only until Putin or his (possibly more nationalist) successor feels ready to challenge the outcome again either directly or indirectly.

The other — unpleasant — choice is to decide that whatever one thinks of Russia’s behavior and motives, America needs to find some way to ensure that the confrontation over Ukraine does not becoming an enduring reality of twenty-first century Europe and an organizing principle of U.S. foreign policy at a time when Washington should be focusing its resources and attention on East Asia.

That requires an inherently imperfect compromise with Moscow.

Such a compromise need not damage any vital American national interests.

The United States has survived for well over two hundred years without a military alliance with Ukraine (which we could have had the day after Ukraine’s independence, without NATO, if we really considered it vital to U.S. security).

An imperfect compromise will not solve all or even most of America’s problems with Russia.

Among other things, Washington and Moscow can’t and won’t return to the pre-Crimea status quo and Russia’s continuing possession of Crimea will impose costs on Moscow.

The United States can avoid a new Cold War with Russia, but only with a Cold Peace.