September 30, 2014
DONETSK, Ukraine -- Deadly fighting has broken out again between the government and rebels around the strategically important airport outside Donetsk, a continuing source of friction that is testing the resilience of a recent cease-fire agreement. 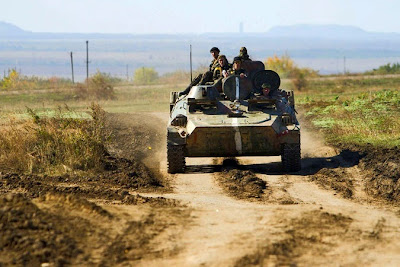 It was the deadliest attack since the cease-fire was announced on Sept. 5.

President Petro O. Poroshenko has called the cease-fire the keystone to his peace plan for the country, and in a nationally televised news conference on Thursday said he had “no doubt that the biggest, most dangerous part of the war is already behind us.”

But at important positions held by Ukrainian forces, like the airport and the city of Debaltseve, a crucial junction between the largest rebel cities of Donetsk and Luhansk, shelling has only intensified in recent days.

The upsurge in violence comes at a particularly critical moment, as Russian, Ukrainian and rebel military officials are meeting to work out the boundaries of a buffer zone of 30 kilometers, about 19 miles, that, when finalized, could mark a neutral area in a new, frozen conflict.

“The line drawn on paper does not correspond to the current positions,” said Andrei Purgin, the deputy prime minister of the rebel Donetsk People’s Republic, who participated in the talks in Minsk, Belarus, that led to the cease-fire.

In an interview, Mr. Purgin said that fighting was taking place at contested points on the proposed demarcation line, which he said amounted to 30 percent of the border between the rebel republics and Ukraine.

He also claimed that the Ukrainian Army was pouring in troops to defend the airport, which he likened to “a fetish.”

According to the cease-fire agreement, “the airport should be ours,” he said.

“But they are not leaving it.”

A Russian Army delegation led by Aleksandr Lentsov, the deputy commander of Russia’s ground forces, has been in Ukraine since last week, and first met with Ukrainian and rebel military representatives on Friday, according to an official involved in the talks.

Russia has sought to minimize its public role in mediating the conflict, and on Friday the Russian Foreign Ministry denied it was a party to the talks.

On Saturday, however, Russian state television broadcast an interview with Mr. Lentsov in the rebel-held city of Horlivka, Ukraine.

“There are questions where we have found common ground, and some questions are problematic,” Mr. Lentsov said without elaborating in televised comments.

“Our main task is a cease-fire. Both sides should understand that.”

Perhaps no question is more problematic than the Donetsk airport, which was renovated for the Euro 2012 soccer championship held in Ukraine and, if repaired, could be a vital supply line for either the fledgling rebel state or the Ukrainian military.

Speaking with several journalists on Saturday, Ihor Kolomoysky, the billionaire governor of the neighboring Dnipropetrovsk region, said that Ukraine had agreed to abandon the airport in exchange for a wide stretch of territory south of Donetsk, a quid pro quo that had previously been unreported.

With Ukraine still reeling from a rebel counteroffensive in August, he said, the front lines will most likely remain static until spring.

Mr. Lysenko, the military spokesman, denied during a briefing on Monday that the army was planning to abandon its positions at the airport, saying it “was, is and will be under the control of the Ukrainian military.”

Nonetheless, he said, the decision belongs to his superiors.

“We have a high military command, and it decides where the Ukrainian Army moves,” he said.

While fighting raged in the east, thousands of pro-Ukrainian demonstrators in Kharkiv late Sunday evening toppled a 40-foot statue of Lenin, an anti-Russian gesture that raised the possibility of violence in what is the country’s second-largest city.

Some of the protesters etched a wolfsangel, a symbol once used by the Nazis and now by Ukrainian ultranationalists, into the statue’s pedestal.

Kharkiv saw brutal street fights in March between supporters and opponents of the new Kiev government, but has quieted in recent months.

The city police made no effort to disperse the crowds.

But they did announce an investigation into the episode at the same time that a protester was sawing through the leg of the statue with a chain saw.

Gennady A. Kernes, the city’s divisive and powerful mayor, promised Monday to restore the statue in an attempt to prevent a pro-Russian backlash in the city.