Most Russian Forces Now Out Of Ukraine, Kiev Says

September 11, 2014
KIEV, Ukraine -- President Petro O. Poroshenko of Ukraine said on Wednesday that the bulk of Russian forces had withdrawn from Ukrainian territory, a move that he said heightened the chances for a lasting cease-fire in the southeast. 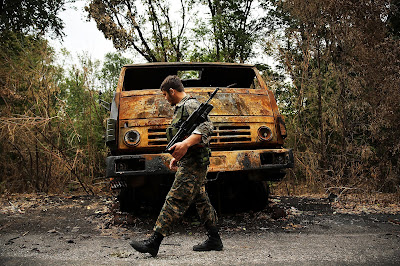 Speaking at the start of a cabinet meeting that was broadcast nationally, the president also announced plans to move ahead with a law intended to cement the wobbly truce reached last Friday.

Mr. Poroshenko appeared to be trying to create a sense of momentum around the peace process, even though a final outcome remains the subject of arduous negotiations.

The law he discussed, for example, has been the source of widely different interpretations.

“Based on the latest information I have received from our intelligence services, 70 percent of the Russian troops have moved back across the border,” Mr. Poroshenko said.

“This bolsters our hope that the peace initiatives enjoy good prospects.”

Still, he noted that the cease-fire remained shaky, accusing Russian-backed militias of constantly trying to provoke the Ukrainian forces.

He sounded a hopeful note over all, however, saying the situation had “radically changed.”

With peace prospects still uncertain, the European Union was considering a timetable for imposing sanctions against Russia’s energy and banking sectors in an effort to compel the Kremlin to support the cease-fire more actively.

Chancellor Angela Merkel of Germany told the Parliament in Berlin on Wednesday that the new sanctions, approved by leaders of the European Union on Monday, should be applied immediately because the cease-fire protocol had not been put fully into effect, even if the situation had improved.

Ms. Merkel’s assessment did not differ markedly from that of Ukraine, but she chose to emphasize the “lack of clarity” in the fulfillment of numerous points of the plan.

She also stressed that the path to solving the Ukraine crisis would be “long and rocky.”

Federica Mogherini, the Italian foreign minister and the European Union’s new foreign policy chief-designate, told reporters on Wednesday that Ukraine’s foreign minister, Pavlo Klimkin, had told her the cease-fire was “basically holding” but asked for more European pressure on Russia.

“He told me we need new sanctions,” Ms. Mogherini said.

She indicated that European countries were struggling to find a common position on when to actually impose the new sanctions.

She said some countries wanted a new discussion by 28 leaders, which would in effect put matters back where they started when they met in Brussels on Aug 30.

In late August, Ukrainian troops were overwhelmed by separatists, widely believed to be backed by Russian forces, who reversed weeks of gains.

The cease-fire agreement was reached in Minsk, Belarus, soon afterward.

Russia has long denied sending arms or troops across the border.

But NATO has said that at least 1,000 Russians were deployed in late August, and even a separatist commander said that up to 4,000 Russians, including active troops, had fought in Ukraine, although he described them as volunteers who were using their vacation time.

Mr. Poroshenko, who is scheduled to meet with President Obama in Washington on Sept. 18, also said he would introduce a law as early as next week that would grant parts of the breakaway regions of Donetsk and Luhansk temporary self-rule.

Even though representatives of the two main breakaway regions signed the cease-fire agreement, their goals are not always clear.

Some leaders have said they would continue to push for independence.

They began fighting five months ago to join Russia, although the Kremlin has never signaled it would take them.

“Ukraine has made no concessions with regard to its territorial integrity,” Mr. Poroshenko told the cabinet.

“There is no question of federalization or separation of any Ukrainian territory.”

The president said that 700 Ukrainian prisoners had been released, with another 500 in custody.

Most of those would appear to be soldiers, because a government spokesman said Wednesday that only 20 soldiers had been released so far.

Mr. Poroshenko gave no specifics about the bill on special status for the areas held by the rebels.

The agreement reached in Minsk last Friday calls for Ukraine to move toward “decentralization,” first by adopting a temporary law that gives special status to certain districts of the Donetsk and Luhansk regions.

Officials and analysts noted that important questions remain about that provision.

Officials at the Foreign Ministry in Kiev declined to comment on Ukraine’s negotiating position.

But a political adviser to Mr. Poroshenko said that each of the 12 points in the cease-fire protocol needed to be negotiated in detail, with the government focused first on silencing the guns and obtaining the release of hundreds of prisoners.

“Nobody knows what special status means,” said the adviser, speaking on the condition of anonymity because he was not directly involved in the talks.

He said Ukraine rejected the idea of federalization, particularly since the area held by the rebels represented only about one-third of the territory of the two regions.

Russia has been pushing since March for federalization, seen as a means to give the regions sufficient autonomy so that they could veto any national legislation that might move Ukraine closer to the West, particularly joining NATO.

Regardless of whether Russia accomplishes that goal, there has been concern that Russia’s president, Vladimir V. Putin, might try to create a frozen conflict in the area, leaving Ukraine permanently destabilized.

Putin has had little to say about Ukraine since the cease-fire was signed.

He said in Moscow on Wednesday that Russia would continue to build up its military with large-scale weapons purchases to meet any threat, particularly from the United States and NATO.

Putin cited the United States’ continued development of a missile defense system in Europe and Alaska as a major threat facing Russia, but not the only one.

“There are other things that bother us,” Putin told senior officials who were meeting to discuss a 10-year arms-buying program.

“Military space exploration continues, the issue of the use of nonnuclear strategic weapons is being studied and so on and so on,” he continued.

“A lot of threats are emerging. Recently, as you know, there was a decision made to expand NATO forces in Eastern Europe.”

The Kremlin started a major program to overhaul its army and navy in 2011, with plans to spend more than $500 billion through 2020.

Putin said on Wednesday that Russia needed to reduce its reliance on foreign manufacturers of certain weapons and military components, and expand its own ability to make everything the military needs.