August 29, 2014
UNITED NATIONS, USA -- The United States told an emergency meeting of the U.N. Security Council on Thursday that Russia has "outright lied" over its military activity inside Ukraine, where Russian-backed separatists have been fighting Ukrainian armed forces. 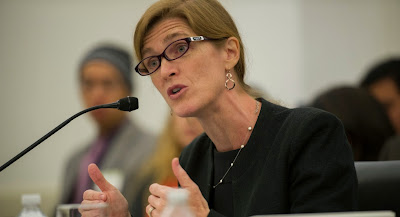 The accusation came hours before President Obama said the United States "is not taking military action to solve the Ukrainian problem" but trying to mobilize international pressure on Moscow.

"Russian soldiers, tanks and air defense have supported and fight alongside separatists as they open a new front in a crisis manufactured and fueled by Russia," Samantha Power, U.S. ambassador to the United Nations, told the council.

She noted that it was not the first time Russia has been called by the council to account for its activities inside Ukraine.

"At every step, Russia has come before this council to say everything but the truth," Power said.

"It has manipulated, obfuscated and outright lied."

In response, the Russian ambassador, Vitaly Churkin, said, "Everyone knows there are Russian volunteers in eastern Ukraine. No one is hiding it."

He said the conflict was Ukraine's fault, calling it the "direct consequence of the reckless policy of Kiev, which is conducting a war against its own people."

Rather than blame Russia, he said, the United States should "restrain your geopolitical ambitions. Countries around the world would breathe a sigh of relief."

Churkin asked if Kiev's demand for separatists to disarm was an attempt to provoke more violence.

Pavlichenko replied that Kiev is "ready to engage on a whole range of issues" and the only non-negotiable issues are Ukraine's sovereignty, territorial integrity and its "European aspirations."

At the White House, Obama ruled out a U.S. military response.

"It is not in the cards for us to see a military confrontation between Russia and the United States in this region," he said during a 30-minute news conference.

He said he did not see the moves of the past week as an invasion but "a continuation of what's been taking place for months now ... not really a shift."

"This is not a homegrown, indigenous uprising in eastern Ukraine," he said.

"We have not seen any meaningful action on the part of Russia to actually try to resolve this in a diplomatic fashion," Obama said.

He spoke earlier in the day with German Chancellor Angela Merkel about the Russian incursion, and both agreed the United States and European Union would have to consider expanding sanctions on Moscow, the White House said in a statement.

The U.N. Security Council convened the emergency meeting hours after Ukrainian President Petro Poroshenko, who will meet with Obama at the White House next month, declared that "Russian forces have entered Ukraine" in support of separatist rebels.

The meeting, called by Lithuania, followed charges Thursday by NATO officials of a significant increase of Russian military activity — including evidence of combat soldiers — in eastern Ukraine.

Russia has strongly denied such allegations.

"The mask is coming off. In these recent acts, we see Russia's actions for what they are — a deliberate effort to support and now fight alongside illegal separatists in another sovereign country."

Power said Russia's actions in the past 48 hours "have spoken volumes," and she called on the Security Council to take immediate action.

"How can we tell those countries that border Russia that their peace and sovereignty is guaranteed if we do not make our message heard on Ukraine?" she asked the council.

"The cost of inaction is unacceptable."

Jeffrey Feltman, U.N. undersecretary-general for political affairs, opened the Security Council meeting by saying its immediate focus "must be to find ways to reverse the dangerous escalation of fighting that has occurred over the past 24 hours and move quickly away from armed conflict and toward political solutions and dialogue."

Ukraine has charged that at least two convoys of Russian military equipment entered southeastern Ukraine this week to open up a third front in the fighting between Ukrainian armed forces and Russian-backed separatists in eastern regions.

More than 2,000 people have died in clashes in eastern Ukraine, according to a recent U.N. report.

Russian-backed rebels have declared two regions as independent republics and the cities of Donetsk and Luhansk have been largely surrounded by Ukrainian forces.

Poroshenko, who discussed the crisis with Putin two days ago, called for U.N. action in a televised statement to the nation, saying, "The world must provide assessment of sharp aggravation of the situation in Ukraine."

"Russian military boots are on Russian ground," said Ukrainian Prime Minister Arseniy Yatsenyuk., who also appealed to the United Nations for a response to a "growing military threat from Russia."

In London, British Prime Minister David Cameron said there is "mounting evidence that Russian troops have made large-scale incursions" into southeastern Ukraine.

Such actions are "completely unacceptable and illegal," he said, urging Russia to find a political solution to the crisis, or "there will be further consequences."

In Brussels, Brig. Gen. Nico Tak said at NATO headquarters Thursday that the alliance noted a "significant escalation in both the level and sophistication of Russia's military interference in Ukraine" in the past two weeks.

"Russia is reinforcing and resupplying separatist forces in a blatant attempt to change the momentum of the fighting, which is currently favoring the Ukrainian military," Tak said.

Geoffrey Pyatt, U.S. ambassador to Ukraine, wrote on Twitter that Russian troops are directly intervening in Ukraine because of a flagging military effort by rebels.

"So now an increasing number of Russian troops are intervening directly in fighting on Ukrainian territory. "

As charges of a Russian incursion mounted, Andrey Kelin, Russia's representative to the Organization of Security and Cooperation in Europe, which has an international monitoring group in Ukraine, denied the allegations.

"We have said that no Russian involvement has been spotted, there are no soldiers or equipment," he said, the Russian news agency ITAR-Tass reported.

"Accusations relating to convoys of armored personnel carriers have been heard during the past week and the week before that," he said.

Ukraine said this week that it had captured 10 Russian paratroopers who had crossed into Ukraine and showed video of some of the men being interviewed.

Putin suggested the soldiers crossed the unmarked border by accident while on training exercises.

After his meeting with Poroshenko in Belarus, Putin said a possible cease-fire plan did not come up.

He said a solution to the crisis in eastern Ukraine is "not our business; it is a domestic matter for Ukraine itself."

He said all Russia could do was "support the creation of an environment of trust."

A pro-Russian leader conceded that as many as 4,000 Russian citizens are fighting alongside the rebels but are doing so strictly voluntarily.

"Many former high-ranking military officers have volunteered to join us. They are fighting with us, considering that to be their duty," Alexander Zakharchenko, prime minister of the self-declared Donetsk People's Republic in Ukraine, told Russian TV, the BBC reports.

"There are also many in the current Russian military that prefer to spend their leave among us, brothers who are fighting for their freedom, rather than on a beach," Zakharchenko said.

In Mariupol, a city of 450,000, a brigade of Ukrainian forces arrived at the airport, while deep trenches were dug a day earlier on the city's edge.

In Donetsk, the largest rebel-held city, 11 people were killed by shelling during the night, the city administration said in a statement.

She voiced concern about overnight deliveries of materiel in southeast Ukraine near Novoazovsk and said Russia was being dishonest about its actions, even to its own people.

Russian forces, she said, are being sent 30 miles inside Ukraine, without them or their families knowing where they are going.

She cited reports of burials in Russia for those who've died in Ukraine and wounded Russian soldiers being treated in a St. Petersburg hospital.

It is a proven fact that for 23 years Ukraine had thieves and criminals as leaders. They robbed the country and its people and filled their own pockets. Now Vladimir Putin is sending his army to clean up all the thieves from the state and local governments and send them to dig potatoes in the fields to teach them how to live and earn their bread honestly.
This may be the last hope for Ukraine.
2:37 PM

Unknown said…
Yes it is true that a specially last President of Ukraine is a criminal.
First Mr. Putin financed Yanukovych during Yanukovych's two Presidential campaigns. Until Yanukovych escaped Ukraine he served Mr. Putin very well.
Now Mr. Putin has last control of Ukraine and he is desperate to get it back.
Mr. Putin should help Russia to get read of criminals that rob its own people, every year, about ~360 billion dollars of Tax payers money.

Ukraine for the citizens of Ukraine, and all those around the world considering them self Ukrainians.
As far as I know Mr. Putin is not Ukrainian and he should mingle with his own crowd.
Mr. Putin still has a chance to be a good friend to Ukrainian people but he can not interfere with Ukrainian decisions how to live, how to govern and so on. Ukraine had 396 years of Russian control, and enough is enough, specially the last 23 years.
Ukraine making its own decisions, this is the only hope and the way of life for Ukraine.
3:16 PM

Unknown said…
The captured Russian paratroopers who did not fire their weapons against Ukrainian military during their arrest should be immediately assisted to get back to Russia to their relatives.
Ukraine knows that Russian people are good people, specially those who are not brainwashed by local propaganda.
There is no bad Nations there is bad people and good people world wide.
3:26 PM

Anonymous said…
Do not get me wrong, I am a Ukrainian and love my country. But I am sad to see how Ukraine has been used and violated by thieves for many years.

If Putin can bring Ukraine to a higher standard of living and without bloodshed? why Not? Ukrainians deserve it.
By the way, I agree, Russian paratroopers should be returned to Russia safely, so that our prisoners can return home safely also.
4:21 PM

Unknown said…
I understand, Russia has higher living standards at the moment due to abandon amount of money they generate from the oil and gas sales. The other reason is that Russia has army of bureaucrats who receives high income, that pulls all society to have higher income. Without high income bureaucrats will go abroad and regime will collapse.It is unlikely thou that oil or gas prices will drop too low for too long in forcible future but, most important point is that there is no need and no interest to increase Ukrainian living standards in principle. One of major reasons for that is large demand in Russia for cheap military goods that are manufactured by Ukraine. If living standards will increase in Ukraine, labor cost in Ukraine will increase proportionally and Russian import will increase. Russia can not tolerate this.
So, keeping low living standards in Ukraine is major Russian priority. The other thing is Russia is enjoin is a steady stream of professionals coming from Ukraine. That will stop if Ukrainian standard living will increase.
Those above are some of a multiple reasons why Mr. Putin will not do any thing to increase Ukrainian living standards.

Most important point is that all Ukrainian being suppressed when Russia ruled. It would be considered slave mentality to ask your neighbor to come and rule over you. When people do not have their own Country and the freedom to express their way of life they become an ethnic group of an other nation; They will never become a Nation.
7:14 PM