July 26, 2014
WASHINGTON, DC -- The White House issued its strongest denunciation yet of Russian President Vladimir Putin over the downing of the Malaysia Airlines flight in eastern Ukraine, saying Friday that available evidence shows the Russians are "culpable" in the plane crash. 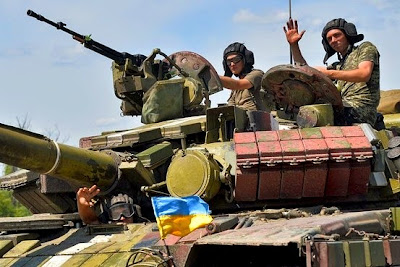 Ukrainian soldiers wave as their convoy of tanks passes through the eastern city of Druzhkivka on July 21. Ukraine said Friday that government troops had recaptured the city of Lysychansk.

The charge came on the same day Pentagon officials said Moscow was preparing to transfer sophisticated rocket systems to pro-Russia separatists in Ukraine.

U.S. officials said that while Russia has previously sent ground-attack rockets across the border, they have evidence that Russia was preparing to transfer heavier, more powerful rocket systems to the rebels, who have been struggling in recent weeks to counter the Ukrainian military.

A day earlier, the Obama administration charged that Russian forces have fired artillery into Ukraine in an attempt to disrupt government forces.

The U.S. criticism reflects a hardening of Washington's view that Russia supplied separatist allies with the surface-to-air weapon used to shoot down Flight 17, along with a message to European allies that Putin hasn't been embarrassed into backing down from his support of rebels.

The U.S. is trying to ratchet up pressure on Moscow, and prod European allies to take action on a broader array of sanctions to punish Russia for its support of Ukrainian rebels.

Administration officials said they expect Europe to adopt more stringent sanctions against Russia within the next week, and said they are considering expanding U.S. measures.

Late Friday, European officials added sanctions on individuals including Russia's Director of Foreign Intelligence and others.

Vice President Joe Biden spoke on Friday with Ukrainian President Petro Poroshenko, reiterating the U.S. charges and vowing that Washington would continue consulting with the European Union and the Group of Seven leading nations about "imposing further costs on Russia for its deeply destabilizing and irresponsible actions in Ukraine."

Mr. Poroshenko, writing in an op-ed on the Washington Post website, called Friday for "a larger response" by the U.S. and Europe, including deeper, "sectoral" sanctions against Russia, security aid and assistance for the country's economy and governance.

"We have concluded that Vladimir Putin and the Russians are culpable for this tragedy," Mr. Earnest said.

Russia has repeatedly denied allegations that it was arming the rebels and Putin has said the ultimate blame for downing of Flight 17 lay with the Ukrainians for creating the situation in the east of the country.

Mr. Earnest said President Barack Obama believed the world would regard the plane crash as "a head snapper" that would draw attention to Russian actions that had been too widely ignored.

"Whether it is the Russians themselves that pulled the trigger or Russian separatists trained by Russians, it's all the same; it all goes back, ultimately, to Vladimir Putin," Mr. Earnest said.

"We believe that they are able to transfer this equipment at any time, at any moment."

The rockets Russia is alleged to be providing are larger and capable of far greater damage.

Col. Warren declined to specify the volume of artillery fire from Russia into Ukraine, but said there have been "several instances."

Col. Warren said he wasn't aware of any Ukrainian counter-fire aimed at the artillery barrage from Russian territory.

"This is unquestionably an escalation from a military perspective and flies in the face of everything the Russians have said up until now about their desire to help contribute to de-escalation," Col. Warren said.

A spokesman for Russia's border security service, however, told Russian news agencies that Ukraine has fired 40 shells into Russian territory.

Russian officials denied that Russia had fired artillery into Ukraine, and said Washington had provided no evidence to back its allegations.

Col. Warren said he was unaware of civilian casualties from artillery fire into Ukraine, but said they are "of great concern" because artillery isn't a precise weapon and its use increases risk of casualties among non-combatants.

But Mr. Earnest played down the resignation of Mr. Yatsenyuk, saying the U.S. had expected new Parliamentary elections to be called.

"This is part of domestic politics in Ukraine, but it does not, in any way, affect the United States' relationship and support for the Ukrainian government and the Ukrainian people as they confront the destabilizing activities of their neighbor," Mr. Earnest said.

Ukraine said Friday it secured control of the separatist stronghold of Lysychansk after several days of fierce fighting, a gain it said would pave the way for its forces to take back a string of other important rebel-held positions.

Kiev has reported steady progress in its fight against the separatists but the government says its efforts have been hampered by a flow of weapons and artillery fire from across the border that it says hasn't stopped even after last week's downing of Flight 17—an allegation the U.S. has backed and Russia has repeatedly denied.

The Ukrainian military has made several key gains in the past week has taken back 10 towns and nearly surrounded the vital rebel-held cities of Luhansk and Donetsk, Ukraine's National Security and Defense council said.

On Friday, soldiers raised the country's flag above Lysychansk after pushing out a powerful militia headed by a top rebel commander, it said.

"The armed forces of Ukraine have been able to deal the rebels powerful blows on several fronts," council spokesman Col. Andriy Lysenko said.

A post on a social-media account associated with pro-Russian rebel media leader Igor Girkin, who is best known by the norm de guerre Igor Strelkov, confirmed that fighters with the "Ghost Battalion" militia headed by leading insurgent Alexei Mozgovoi had pulled back to the nearby city of Stakhanov and said they were preparing for a counterattack.

The message said rebel forces had come under heavy shelling on the outskirts of Luhansk and Donetsk, the regional capital, and that several civilians had been killed.

Human Rights Watch issued a report late Thursday accusing the Ukrainian government of killing at least 16 civilians and wounding many more in four attacks on Donetsk between July 12 and July 21 by firing unguided rockets into insurgent-controlled areas of the city.

"If insurgent and Ukrainian government forces are serious about limiting harm to civilians, they should both immediately stop using these weapons in populated areas."

Ukrainian officials and many residents of rebel-held towns have accused the insurgents of firing mortars and artillery at residential blocks to discredit Kiev forces.

Col. Lysenko said government forces would now focus on the rebel base at Horlivka, which controls a major road leading into Donetsk.

Despite the advances, government forces are continuing to meet with stiff resistance, Col. Lysenko said, with several of its positions coming under heavy mortar and rocket bombardment overnight.

He said a government position at Marinivka, near the Russian border, had been shelled twice in the early morning hours from the Russian side of the frontier.

Ukraine has repeatedly said its forces have come under fire from Russian territory.

On Thursday, U.S. officials said they had evidence that Russia has been firing artillery across the border at Ukrainian positions.

The U.S. and Kiev have also said Moscow appears to have stepped up its efforts to arm the rebels, and has been sending increasingly sophisticated weapons across the border.

On Friday, Russia's foreign ministry called the U.S. claims "unsubstantiated insinuations" and said Washington had offered no evidence of shelling coming from Russia.

Other officials countered by accusing Ukraine of shelling Russian territory.

Col. Lysenko also said that Ukraine's border service had shot down three unmanned surveillance drones that had appeared to have come from the Russian side of the border.

The U.S. and European Union have moved to strengthen sanctions against Russia for its alleged meddling and providing of the advanced missile system Western officials believe was used by the rebels to shoot down the Amsterdam-Kuala Lumpur civilian airliner.

On Friday, Russia's consumer safety regulator filed a lawsuit Friday in Moscow court seeking to ban some of McDonald's Corp.'s most popular burgers and shakes.

Russia has routinely moved to ban products in the past from countries its has had tensions with, leading to charges it was asserting economic pressure for political reasons, which Moscow denies.

In a statement, the agency said a May probe at two McDonald's restaurants in the western city of Veliky Novgorod uncovered traces of E.coli in some Caesar wraps and salads.

McDonald's said it hasn't been approached by the agency over the issue and hasn't received any notice of the claim.

The lawsuit comes only three months after McDonald's shut down its restaurants in the breakaway region of Crimea following its March annexation by Russia.

Meanwhile, a Russian regional court on Friday ordered the detention of a Ukrainian pilot being held on charges stemming from the death of two Russian reporters be extended until late August.

Ukraine claims the pilot, Nadezhda Savchenko, was abducted by separatist rebels and handed over to the Russians, while Russian police claim she was arrested after trying to cross into Russia in an effort to defect.

In Kiev, it was unclear when parliament would vote whether to accept Prime Minister Arseniy Yatsenyuk's resignation, which he submitted Thursday after the ruling coalition in the chamber dissolved, a move meant to clear the way for elections that would likely give President Poroshenko stronger backing.

Mr. Poroshenko had asked parliament to consider the matter urgently, but two key groups of lawmakers said Mr. Yatsenyuk should continue in the post, even as government officials said Deputy Prime Minister Volodymyr Groysman had been selected as acting prime minister.

Skotkolr said…
Our President Obama, is the Lamest piece of shit in existence.
Our legislature isn't much farther behind him. The West has let the Ukraine people down when we should have made a clear and cut action concerning the invasion of Crimea and Eastern Ukraine. The US AND European Governments are too concerned about Money to do the right thing where Israel, Syrya and Ukraine are concerned.