Putin's Ukraine Assault: In A Shambles But Far From Over

July 09, 2014
KIEV, Ukraine -- Pro-Russian rebels are in retreat, but the Kremlin will next likely turn to using economic power against Kiev. 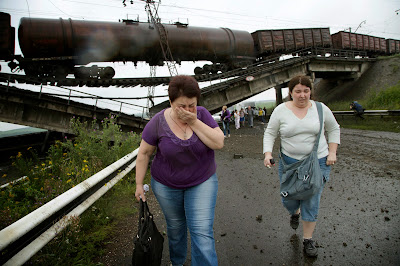 Significantly, the forced retreat of these Russian proxies on Sunday from Slavyansk and some other insurgent-occupied cities was chaotic.

Some insurgents simply dropped their weapons and have been trying to escape to Russia or the Crimea region of Ukraine, which remains firmly in Russian hands.

Others have merely fallen back and redeployed in rebel-held Donetsk and Luhansk, provincial capitals in Ukraine's eastern Donbas region.

As a result, today some three-quarters of the territory of the Donbas and nearly half of its population is back under the control of the Kiev government.

Ukraine's forces have reportedly captured large amounts of weapons and ammunition, including anti-aircraft weapons with documentation and operating instructions indicating their origins in Russia.

Ukraine's deputy defense minister, Adm. Ihor Kabanenko, told me in Kiev last week that Ukraine has sealed most of its border with Russia.

Now the Ukrainian government is moving quickly in the formerly occupied cities to provide services such as medical care for the sick and elderly.

It is resuming payments of pensions and wages that were interrupted by the insurgent takeovers.

Television reports from independent Ukrainian channels make clear that as emergency supplies of food arrive, the population—earlier portrayed as pro-separatist by Russian and other media—is not hostile to Ukraine.

A poll taken last week by the Kiev International Institute of Sociology showed that in the Donbas, Ukraine's President Petro Poroshenko now enjoys more trust than either Russia's President Vladimir Putin or the insurgents.

Russian media have also changed their tone markedly since the Ukrainian counteroffensive began to make major progress in mid-June.

There has been a sharp decline in the use of terms like "fascist junta" to describe Ukraine's government.

Some Russian media outlets have even reported on the humanitarian relief efforts by Ukraine's forces.

Even before this week's military gains by Kiev, influential Russian opinion makers had begun to prepare the public for a Kremlin stand-down.

On June 21, the nationalistic Russian film director Nikita Mikhalkov used his program on the Rossiya 24 TV channel to indicate that Russia cannot intervene in Ukraine without United Nations approval and that such support is not forthcoming.

The patriarch of the Russian Orthodox Church, Metropolitan Kirill, said on June 17 that the fighting in Ukraine's east was an "internecine conflict" in which neither side could make a Christian "just war" claim.

A survey released this week by VTsIOM, a Kremlin-friendly polling group, showed that 66% of Russians now oppose military intervention in Ukraine, while in March a poll by the Levada Center found that 65% of Russians said Russia has the right to militarily intervene in both Crimea and Eastern Ukraine.

But the trouble in eastern Ukraine is far from resolved.

Another two million are now under Russian dominion in Crimea.

What can we expect as an endgame?

There are two possible outcomes of this proxy war:

First is the military track.

With Ukraine's use of air power, and with effective control of borders, the military will continue to make inroads, taking peripheral towns and smaller cities, and squeezing the insurgents to the main cities of the Donbas region.

Kiev has announced it is cutting off pensions and wages to state workers in rebel-occupied Donetsk and Luhansk.

The intent is to compel the civilians there to put pressure on their occupiers.

Rebel leaders are already under pressure from increasing internal friction, as seen recently in their clashing public declarations regarding the success of the Ukraine counterattacks and in reports of violence between Russian mercenaries from the Caucasus and local rebels.

Rising factionalism and divisions among the insurgents seem likely.

With Russian propagandists now signaling to their own population that Moscow will not directly invade Ukraine, many more fighters are likely to lay down their weapons or desert.

Such desertions could dramatically increase in the coming weeks, especially if Ukraine offers a conditional amnesty for those surrendering.

Still, there are many true believers and Russian ultra-nationalists among the fighters.

Given Ukraine's policy of avoiding air and artillery strikes against major population centers, the complete liberation of the cities of Donetsk and Luhansk is unlikely without bloody urban combat.

The second way out may be through negotiations.

This is the strategy that Germany's Chancellor Angela Merkel has been pursuing.

To that end, the Germans have been pressing Ukraine's leaders to integrate Viktor Medvedchuk, the pro-Russian former chief of staff to ex-Ukraine President Leonid Kuchma, into a peace process.

There is even talk that Mr. Medvedchuk (Mr. Putin is the godfather of his daughter) may emerge as an interim governor of Donetsk as part of a peace accord.

Moscow would welcome having Mr. Medvedchuk as a major pro-Russian player in Ukraine's politics.

But the reality is that no matter the outcome, President Putin's Ukraine strategy is a shambles.

By taking Crimea and fomenting a violent insurgency that has left as many as 2,000 dead, he has turned a country that had a large pro-Russian minority against him, caused a surge of Ukrainian patriotism, and contributed to the emergence of a solid pro-EU majority in Ukraine.

Assuming that the separatist insurgency and proxy war continue to wane, Mr. Putin's next moves will likely focus on economic sabotage of Ukraine's pro-Western authorities through export barriers and high gas prices, accompanied by efforts to rebuild a pro-Russian political force inside the country.

But even that approach would signal an important turning point:

Having wreaked havoc and death in eastern Ukraine, Mr. Putin could be retreating from the path of war, returning for the time being to soft power in the battle for Ukraine.

Unknown said…
This comment has been removed by the author.
4:41 PM

Unknown said…
Next most important move for Ukrainian ATO is to step-up the efforts and get Donbass region cleared from rebels. Other wise if left under rebel control will create an island of instability which will effect investment climate, will allow Russia to introduce spacial economic regime, install pro-Russian politician such as Medvedchuk, and organize very strong propaganda campaign, daily comparing Donbass ,and rest of Ukraine for the next and critical 4-5 years of transition to a European standards. It will be a "bil'mo on Ukrainian eye". After difficult years of transition with more economically stable Donbass it will be perfect political platform for Medvedchuk for his presidential campaign. Such situation must be avoided because, even if Ukraine will improve on all fronts memory of peoples hardship may get Medvedchuk to a President seat, where he will put brakes on stable development of a country. It is recipe for future disaster. Eastern industrial complex need immediate modernization which Russia has no interest to provide. Russia needs time to continue receive its military equipment for low price for the next 5-10 years at most, and during this time they will develop local replacement. All the Eastern territory must be under military, economic and political control of Kiev with increased level of financial freedom for local authorities. For the Crimea, additional and serious sanctions must be activated against Russia immediately especially in technological and energy sectors.
4:48 PM