June 30, 2014
KIEV, Ukraine -- Several hundred Ukrainian soldiers and activists gathered outside the presidential administration in Kiev on Sunday to call for an end to the cease-fire in eastern Ukraine, an indication that tensions remain high a day ahead of a deadline for steps toward easing the violence. 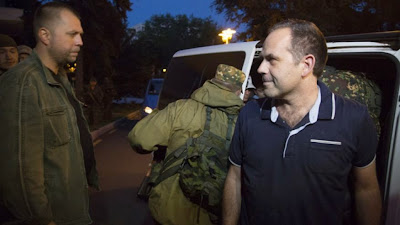 June 28, 2014: An unidentified member of the OSCE Special Monitoring Mission in Ukraine gets out of a vehicle next to Alexander Borodai, so called Prime Minister of the self proclaimed 'Donetsk People's Republic', left, on arrival in the city of Donetsk, eastern Ukraine.

After the weeklong cease-fire expired Friday, President Petro Poroshenko agreed to extend it through Monday in an effort to stop the fighting between government troops and Moscow-backed separatists that has left hundreds dead.

The European Union also set a Monday deadline for Russia and the separatists to take a series of steps, including releasing all captives, retreating from border checkpoints, agreeing on a way to verify the cease-fire and beginning "substantial negotiations" on Poroshenko's peace plan.

If this was not done, the EU warned that it was ready to impose new punitive measures on Russia.

Soldiers from the Donbass battalion, a militia formed by volunteers, appealed to Poroshenko on Sunday to allow them to resume the fight.

A presidential administration official, Henadiy Zubko, promised to pass on their demands to the president, but told them that the cease-fire order would remain in effect until 10 p.m. Monday (1900GMT).

Both sides have been accused of violating the cease-fire.

Late Saturday, pro-Russia separatists released a second team of four observers from the Organization for Security and Cooperation in Europe, who had been held captive in eastern Ukraine since the end of May.

The first team of four was freed last week.

Ukraine on Friday signed a free-trade pact with the EU, the very deal that the former Ukrainian president dumped under pressure from Moscow in November, fueling huge protests that eventually drove him from power.

Moscow responded to those events by annexing the mainly Russian-speaking Crimean Peninsula in March, and the pro-Russia insurgency in eastern Ukraine broke out a month later.

The United States and the EU have slapped travel bans and asset freezes on members of Russian President Vladimir Putin's inner circle and threatened to impose more crippling sanctions against entire sectors of Russia's economy if the Kremlin fails to de-escalate the crisis.