Is The U.S. Giving Putin Green Light In Ukraine? 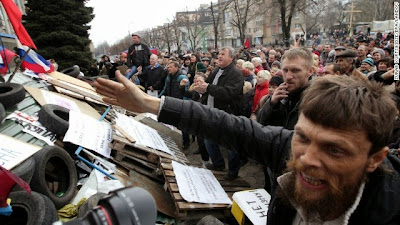 Russia is now trying the same trick in mainland Ukraine.

Over the past several days, masked, heavily armed men have seized strategic locations in eastern Ukraine.

In Donetsk, they have taken control of the regional legislature building and the interior ministry.

In Luhansk, they have taken the compound of the state security agency.

In the city of Kramatorsk, in the Donetsk region, armed men shot their way into police headquarters.

Cell phone towers are being toppled through the area, according to Ukraine's acting interior minister, apparently with a view to silencing nonmilitary communications.

Uniformed men have established checkpoints around the city of Sloviansk, also near Donetsk.

A gunfight erupted at one checkpoint on Sunday, apparently leaving two dead.

The Russians have infiltrated special forces into Ukraine over the past weeks and months.

Now they are busily creating conditions of "instability" that could provide a pretext for outright Russian intervention, followed most likely by a partition of Ukraine and alignment of the eastern provinces toward Russia.

In Crimea, Russian intervention has been followed by a campaign of "disappearances" of opposition and potential opposition figures.

Inside Russia too, policy is turning again sharply repressive, symbolized by the spread of Communist hammer-and-sickle flags at pro-Putin demonstrations.

Europe outside the Balkans has known profound peace since 1991.

Even the murderous wars in the former Yugoslavia, atrocious as they were, never threatened the general European peace.

The Russians' actions in Ukraine do threaten the general peace.

Russia is using military force -- as opposed to its usual tool kit of corruption, intimidation, and no-return-address assassination -- to reclaim former Soviet-occupied territory.

In Ukraine, Russia has launched a war of reconquest.

It's very hard to predict where that war will stop.

President Obama was very wrong in his speech in Brussels on March 26 to suggest that the United States had no national interest in Ukraine.

What's at stake in Ukraine is the peace and stability of the European continent, an issue over which the United States fought two world wars.

Yet the president has signaled to Russia that it need not fear any very robust U.S. or NATO response to its depredations in Ukraine.

More from the March 26 speech:

"Of course, Ukraine is not a member of NATO -- in part because of its close and complex history with Russia. Nor will Russia be dislodged from Crimea or deterred from further escalation by military force."

Unsurprisingly, Russia is driving right through that green light.

Over the weekend, the White House announced that Vice President Joe Biden will visit Ukraine on April 22, or not for another 10 days.

Ten days from now, Putin could be standing under a "Mission Accomplished" banner in Kharkiv.

Every supposed benefit we receive from Obama's famed Russia "reset" is disintegrating before our eyes.

News is arriving of another Syrian chemical attack, in the village of Kfar Zeita, 125 miles northeast of Damascus.

Syria still holds most of the chemical warfare arsenal that was supposed to have been entirely surrendered to Russia by February 5.

Russia has announced plans to bust up the international sanctions regime against Iran with purchases of 500,000 barrels of Iranian oil a day, potentially nearly doubling Iran's oil exports.

This is a rampage of mischief, far beyond one remote region of southeast Europe.

And yet even as the threat to peace intensifies, the Western leaders and Western alliances charged with keeping the peace dither, fidget, and hem and haw.

The most urgent necessity now: deploy teams of NATO observers to the cities that are targets of Russian activity in eastern Ukraine.

NATO needs eyes and ears on the ground -- and Russia must confront that it is fomenting an international crisis.

NATO needs rapidly to expand its permanent presence with the exposed eastern members of the alliance, especially the three Baltic republics.

Such a move would violate the terms of the 1997 agreement with Russia on NATO expansion, which is precisely why it's an apt response to Russia's violation of the 1994 agreement on Ukraine's territorial integrity.

Russia is infiltrating forces across the border with pathetic ease.

The next round of sanctions on Russia should focus on banks and financial institutions that move the ill-gotten wealth of Russia's corrupt leadership to safe havens in the West.

Putin's fortune is not stored in rubles.

He's all too aware that someday, the kind of rebellion that toppled his Ukraine stooges might topple him.

It won't be easy to find that money, although of course NATO authorities should start the search.

What is easier is to target institutions, Russian and Western, that move money out of Russia -- or that have suspicious clients from Russia.

In the longer term, Europe needs to shift its natural gas sourcing away from Russia.

The U.S. will have to allow natural gas exports, and both Canada and the United States will need to induce private actors to build the liquid natural gas facilities that make exports feasible.

But we face a big threat.

Igor Skakovsky said…
Ukrainian Government should block technology transfer to Russia. This process is very active, specially for helicopter's engines from company "Sich" Ukraine to St.Petersburg, Russia and buses LAZ from Lviv, Ukraine to Michurinsk, Russia and others.
4:20 PM

Michael Harper said…
Just know that Obama's actions are not in line with American values nor the sentiment of the majority. One thing is for sure, we have our own problems to deal with as "O" is a Putin himself! Nonetheless, we should support Ukraine as it is an independent state and Russia is meddling where it ought not. It is true aggression. The question is: where the hell is Western Europe? They want to be global leaders yet are nowhere in sight. So much for wisdom learned during two world wars! The U.N.? Cowards of the worst kind! Embarrassing really.

To my brothers and sisters in Ukraine, fight the good fight. If you want a sovereign country you'll have to take charge of it. Don't let a big bully threaten you - he's a coward at heart. Teddy Roosevelt once said "Speak softly, but carry a big stick!" Get your voices up and show the fangs when needed. If it means shooting or even death in def3ending what you know to be right, then so be it!

The American motto in our Revolution was "In Vindiciam Libertatis" – In Defense of Liberty. Live by it! Unfortunately, we're on the path to having to relive it here in the U.S. I'm ready!