December 04, 2013
KIEV, Ukraine -- Refusing to grant a central demand of protesters who have laid siege to public buildings and occupied a landmark plaza in this rattled capital, the Ukrainian Parliament on Tuesday defeated a measure calling for the resignation of Prime Minister Mykola Azarov and his government. 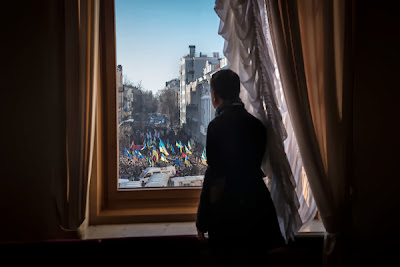 A view of the demonstration outside Parliament.

The failure of the no-confidence vote pushed the battle for the future of Ukraine back onto the streets, where demonstrators and allied political opposition leaders say they would not relent until they succeeded in removing the government, including President Viktor F. Yanukovich.

“Our demand is impeachment of the president and dismissal of the government,” said Oleksiy Ivannikov, 35, a construction engineer who was in a crowd of protesters with his friends.

“How long should we go on compromising?”

In response to Parliament’s refusal to act, demonstrators — who have already blockaded the Cabinet of Ministers building and seized City Hall — said they intended to close off access to the headquarters of the presidential administration, which is heavily guarded by riot police officers.

They also plan to try to cordon off Parliament in a bid to paralyze the legislative and executive branches of government.

Leaders of the protest movement, a loose coalition the three main political opposition parties, civic organizations and student groups, said they were digging in for a long fight.

Since the start of demonstrations on Nov. 22, many protesters, especially students, have been skeptical that elected officials would answer their demands, which were a response to Mr. Yanukovich’s decision not to sign far-reaching political and trade agreements with the European Union that had been in the works for years.

Public anger deepened over brutal tactics used by riot police officers against protesters in Independence Square early Saturday — a display of violence that roused a march and rally by hundreds of thousands of people in Kiev on Sunday, and thousands more in cities around the country.

The protesters occupied Independence Square, setting up barricades that now form a wide perimeter around the landmark plaza and establishing a tent city with first-aid stations and canteens.

By nightfall on Tuesday, they had topped their barricades with razor wire and had iced the streets approaching the square, aiming to slip up the police should they raid on foot.

They also controlled the large Trade Unions building nearby, along with the huge television screen mounted on its facade, allowing them to broadcast the speeches and musical performances that take place virtually around the clock on an outdoor stage.

The control of that building, as well as nearby City Hall, has given the protesters access to shelter, heat and toilets — crucial to maintaining a long standoff in the winter weather.

In a speech to Parliament before Tuesday’s vote, Mr. Azarov once again apologized for the police violence on Saturday and said that an investigation was underway that would hold those responsible accountable.

But he also warned that the authorities would answer any violence.

“We are ready to discuss with peaceful manifestations all conditions of our agreements,” the prime minister said, as opposition lawmakers in the chamber pounded their desks and rendered him nearly inaudible with chants of “Resignation!”

“If we see a fist, we have enough force.”

The prime minister seemed to be suggesting new talks between the Ukrainian government and European leaders.

But while European leaders say they remain open to signing the accords if Ukraine meets previously agreed-upon conditions, like an overhaul of its justice system, they are not willing to renegotiate.

“The European Union is ready to discuss aspects of implementation of the agreement already initialed but not to reopen any kind of negotiations,” said Maja Kocijancic, a spokeswoman for the European Union’s foreign policy chief, Catherine Ashton.

And in a signal of American unhappiness with Ukraine’s decision to distance itself from the European Union, Secretary of State John Kerry skipped a long- anticipated visit to Kiev that was to follow a meeting of NATO foreign ministers in Brussels.

Instead, Mr. Kerry on Wednesday will visit Moldova, a small nation that has pursued closer ties with the European Union in the face of intense pressure from Moscow.

Mr. Kerry on Tuesday urged the Ukrainian government to “listen to the voices of its people” who favor closer ties with the union.

He said Ukrainians should be allowed to make their own choice without “a bidding war.”

Mr. Yanukovich, however, has effectively shut the door to new talks over the agreements.

In the days since he refused to sign them at a summit meeting in Vilnius, Lithuania, last week, he has turned forcefully toward Russia, which had exerted heavy pressure on him to derail the accords.

In an interview with Ukrainian television on Monday evening, Mr. Yanukovich said that he would begin working to extend a strategic partnership agreement first executed with Russia in 1997, and that he was close to securing lower natural gas prices from Russia.

European leaders have said they would not participate in three-way negotiations with Russia, as Mr. Yanukovich has proposed.

On Tuesday, as Mr. Yanukovich flew to China to attend business development meetings, opposition lawmakers continued to call for his ouster.

“We demand the resignation of the government, the president and the minister of internal affairs,” Arseniy P. Yatsenyuk, the leader of the opposition Fatherland coalition, said in Parliament.

Thousands of protesters, many of whom have remained in the city center since the huge rally, marched to the Parliament building, which was shielded by lines of buses and deep columns of riot police officers.

They marched past the Cabinet Ministry, where other protesters continued to block the entrances, and crowded onto the cobblestone slope of Mikhail Grushevsky Street.

“This government and this president are on a path to nowhere,” said Igor S. Palyamichuk, 44, a sales manager at a construction company.

Although a handful of lawmakers have defected from Mr. Yanukovich’s Party of Regions and backed the protests, the party still has a commanding majority.

That was evident with the no-confidence measure, which needed 226 votes for approval.

The tally suggested that while few wanted to be on record in support of the government — especially the Communists, who are allied with the Party of Regions — there was no major revolt.

Opposition lawmakers said they now expected the action to shift onto the street.

“Street politics were always in the forefront,” said Yuri Levchenko, a member of Parliament with the nationalist Svoboda party.

“In this environment, they will stay that way.”

The organizers are using a strategy akin to a spreading ink blot, letting the crowds of giddy young men and women spill across an ever-broadening area of central Kiev, occupying the country’s most important political landscape.

On Independence Square, protesters huddle around drum fires, play guitars and claim the pavement as their own, clearly confident that momentum is on their side.

“The last couple of days have shown we are able to increase our area of control,” Mr. Levchenko said.

The new strategy formulated on Tuesday, he said, was to blockade entrances to the three most important buildings in the capital — the government building, the presidential administration headquarters and Parliament.

Mr. Levchenko said this was also necessary because underground passageways connect the three buildings, so that only when they are all surrounded will the opposition have fully shut down the government.

The buildings themselves remained guarded by a dense police force.

“This is our plan,” Mr. Levchenko said.

“By tomorrow, it should all be in place.”