December 10, 2013
NEW YORK, USA -- George Clooney took a break from popcorn flick chatter to weigh in on something with more gravity: the anti-government protests in Ukraine. 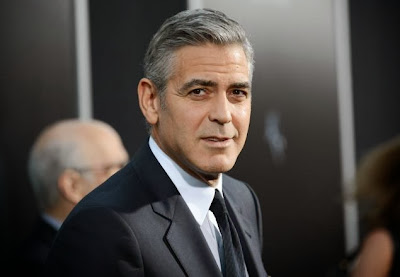 ‘We learned through trial and error that true democracy cannot exist without a free and fair and honest election,’ said Clooney, reflecting on the American experience.

"We here in the United States have great affinity for those seeking democracy," Clooney said in a homemade video.

"We learned through trial and error that true democracy cannot exist without a free and fair and honest election. You cannot have a democracy when you arrest and harm its peaceful protesters."

Since Nov. 21, hordes pro-European Union protesters have flooded the Ukrainian capital of Kiev, outraged that President Viktor Yanukovych recently nixed a treaty with the European Union to strengthen ties with Russia.

Police violently cracked down on the demonstrators, which only strengthened their resolve and galvanized fence sitters to oppose the administration.

Hundreds of police with full riot gear are standing guard in Independence Square after hundreds of thousands of dissidents called for Yanukovych's ouster and toppled a statue of late Soviet leader Vladimir Lenin on Sunday.

It marks the country's largest demonstration since the pro-democracy Orange Revolution, which attributed Yanukovych's 2004 presidential victory to electoral fraud.

Tymoshenko, the opposition leader, is behind bars in what her supporters call political imprisonment.

Her image — complete with halo-like braids befitting Princess Leia — has become an icon of democracy for the dissidents .

"I can almost feel the presence of the brave women and men, old and young, who have gathered in Kiev and other Ukrainian cities to defend their dreams of a democratic and European future," she wrote from her jail cell.

Clooney, the American "Syriana" star, offered his support for the embattled politician, saying true democracy cannot exist "if you take political prisoners like Tymoshenko simply because you disagree with the way they want to govern."

Clooney concluded his video by reiterating his message of solidarity and respect for the protesters.

Surprisingly, Yanukovych has announced he would meet with three former Ukranian presidents on Tuesday to discuss the crisis.

Richard said…
Like when public figures get involved .
6:08 AM

Unknown said…
I leave in US for 24 years, and follow up on what is going on in Ukraine every day. One thing which is most important is if President honestly understands him self and want to make the best for People. It is difficult to know for sure but something tells me that he is quiet clever and he is trying to do what is right. Things are very complicated in politics and it is extremely difficult to be a President in Ukraine.
Best position for Ukraine is:
1. to have as much Independence as possible ;
2. No CU association it is for sure;
3. Adapt and implement of EU laws as much as it is possible.
4. Sign AA agreement only in those areas where Ukraine has advantages with EU and can strongly recover.
5. Step by step, annually prepare new parts of an industries for AA with EU.
6. Use the moment and get best deals with Russia and use existing open trade with Russia to make chosen industries stronger before re a sinning those industries with EU.
2:27 PM