September 09, 2013
OKTYABRSK PORT, Ukraine -- On Jan. 5, the Ocean Fortune, a 380-foot-long workhorse of the global arms trade, left this Black Sea port with unknown cargo concealed in its cavernous hold. 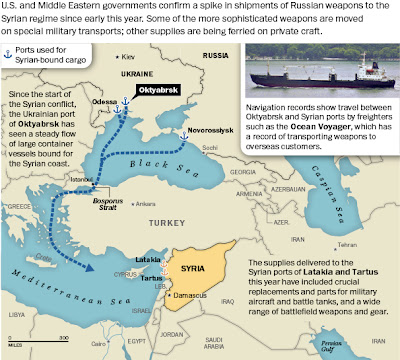 The ship steamed south, slipped through the Bosporus Strait and turned toward the eastern Mediterranean.

Not a trace of the ship was seen for two months, until it surfaced in the southeastern Mediterranean in mid-March.

The ship’s apparent vanishing act repeated a pattern seen by other freighters embarking from the same Black Sea port — a known point of origin for weapons shipments — over the past year.

Recently, such behavior has begun drawing the attention of investigators tracking the flow of arms and supplies to the combatants in Syria’s 21 / 2-year-old uprising.

Western governments have long known that Russia is providing crucial backing for the government of President Bashar al-Assad, including many of the heavy weapons used to battle opposition forces.

But Western intelligence officials and independent experts say a substantial portion of the aid appears to be arriving in commercial ships, prompting analysts to look closely at this Cold War-era military port and its long history of arming Russian allies and some of the world’s most repressive regimes.

A new study by independent conflict researchers describes a heavy volume of traffic in the past two years from Ukraine’s Oktyabrsk port, just up the Black Sea coast from Odessa, to Syria’s main ports on the Mediterranean.

The dozens of ships making the journey ranged from smaller Syrian- and Lebanese-flagged vessels to tanker-size behemoths with a long history of hauling weapons cargos.

The report by C4ADS, a Washington-based nonprofit group, linked some of the larger vessels to a network of businessmen and companies with ties to senior government officials in Russia and Ukraine.

The gaps in transponder data, the authors say, are a relatively recent phenomenon that coincides with international criticism of Russia for aiding its longtime Syrian ally despite the government’s brutal repression of the civilian population.

The authors acknowledged that there are no manifests or satellite photos proving that the ships carried weapons, and they say shipping data are sometimes imperfect.

But they noted that the same gaps were seen in 2012 when the Ocean Fortune and its sister ships were delivering heavy weapons to Venezuelan strongman Hugo Chávez, who died in March.

“This discrepancy, combined with a history of moving weapons on behalf of the Russian government, is what makes the voyage suspicious,” said Farley Mesko, the center’s chief operating officer and a specialist in illicit maritime networks.

Russian President Vladi­mir Putin has publicly defended his country’s right to sell arms to Syria, and senior officials have vowed to fill standing contracts to supply aid to Damascus.