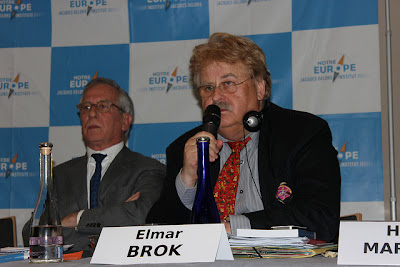 In a separate debate on the future of Ukraine, opposition leaders Arseniy Yatsenyuk and Vitali Klitschko told MEPs that the country's future lies with Europe.

The debates were held in an extraordinary meeting of the EP Committee on Foreign Affairs on Wednesday, also discussing the current situation in Egypt and Syria.

The debates on Ukraine followed recent moves by Russia to block imports of Ukrainian confectionary.

While Russian authorities had cited quality and safety concerns, the measures have been widely viewed as politically motivated.

MEPs described the restrictions as an act of intimidation to discourage Ukraine from concluding the Association Agreement with the EU.

MEPs also said the actions were in breach of World Trade Organization rules and an attack on Ukraine's citizens.

MEPs who participated in the debate broadly voiced their support for signing the EU-Ukraine association agreement in the near future, but also warned that Ukraine's government must meet the EU's conditions, as defined at the Foreign Affairs Council of December 2012, which include addressing use of selective justice, necessary reform of the Prosecutor General's Office and freeing imprisoned former Prime Minister Yulia Timoshenko.

"The future of Ukraine — whether it chooses to ally with Russia or with the EU in its trade and political relations — should be decided in Kiev, not Moscow or Brussels", said Foreign Affairs Committee Chair Elmar Brok (EPP, DE).

Mr Klitschko said the opposition will press the government to take the necessary steps towards signing the agreement.

Mr Yatsenyuk said that an Association Agreement offered the EU and Ukraine the best tool to respond to the geopolitical challenge posed by Russia.

The EU-Ukraine Association agreement which includes also a "Deep and Comprehensive Free Trade Agreement", could be signed November this year when leaders of the EU and its eastern neighbours will meet at the Eastern Partnership summit in Vilnius.

Should the deals be signed, they would require a green light from the European Parliament before they can enter into force.