August 19, 2013
KHARKIV, Ukraine -- A court in Ukraine has postponed the hearing of imprisoned former prime minister and opposition leader, Yulia Tymoshenko, until September. 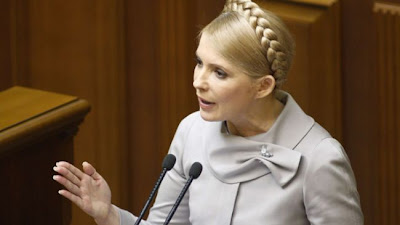 The court in the city of Kharkiv on Friday, postponed the hearing of the former premier for the 21st time, due to Tymoshenko’s absence.

Tymoshenko refused to show up at court as a result of poor health condition.

She is currently receiving medical treatment for chronic back pain at a local hospital.

The former leader of the country’s Orange Revolution has been convicted of overstepping her authority while negotiating a gas deal with Russia in 2009.

She says she's innocent and accuses Ukrainian President Viktor Yanukovych of throwing her in jail to bar her from last October's parliamentary elections.

She has also been charged of embezzling an estimated $405 million and evading tax worth over $87,000.

Tymoshenko has denied the allegations, saying the charges against her are politically motivated and that Ukraine has returned to the dark days of Stalinism.

She was sentenced to seven years in prison in 2011.

If found guilty in the second trial in court, Tymoshenko could face up to 12 years in jail.