Azarov To Head To Moscow For Trade Talks

August 25, 2013
KIEV, Ukraine -- Prime Minister Mykola Azarov will travel to Moscow on Monday for talks with his Russian counterpart Dmitry Medvedev as worries remain that the trade dispute between the two countries may escalate again. 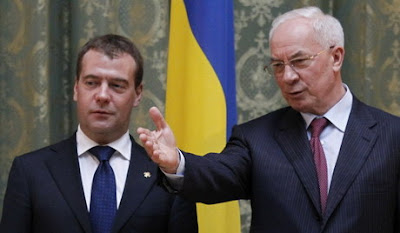 The worries rose after Russian President Vladimir Putin said Thursday that Russia will resort to sweeping restrictions against Ukrainian goods if Kiev signs a free trade and political association agreements with the European Union.

Putin’s comments show recent improvements in trade clearance at the Russian-Ukrainian border are fragile and have potential to quickly escalate into a massive trade war.

"If our neighbors move to significantly liberalize a customs regime with the EU then the Ukrainian market will indeed be flooded by goods whose quality and price are rather good," Putin said, according to Interfax.

"This will prompt them to push Ukrainian-made goods out of the Ukrainian market," Putin said.

“Then the countries of the Customs Union will have to think about protective measures, such a possibility exists."

The protectionist rhetoric comes only two days after Russia has lifted its restriction imposed against Ukrainian goods last week.

The restrictions, which amounted to a de-facto blockade of the Ukrainian goods at the border, were politically motivated to prevent Ukraine from signing the agreements with the EU in November, Ukrainian politicians said.

Putin’s comments echo those made by his chief trade advisor, Sergei Glaziev, on Sunday that Moscow will implement tougher trade sanctions if Ukraine makes “suicidal” move to sign the EU agreements.

Moscow has been persistently encouraging Kiev to drop the EU agreements and instead to join the Customs Union, a Russia-led trade bloc that also includes Kazakhstan and Belarus.

Azarov and Medvedev, following a phone call earlier on Thursday, agreed to meet in Moscow to discuss the recent problems in trade and ways of avoiding them, Natalia Timakova, a spokeswoman for Medvedev, told Interfax.

The European Commission spokesman John Clancy, in a statement on Tuesday, said it was “unacceptable” for Russia to economically threaten Ukraine, linking the threat with a possible signature of the association agreement with the EU.