February 25, 2013
KIEV, Ukraine -- Majority of Ukrainian MPs adopted a declaration of Ukraine's European aspirations and signing of the Association Agreement (AA) between Ukraine and the European Union. 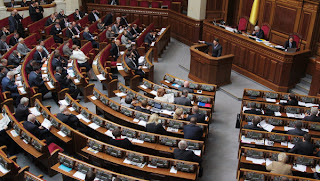 The declaration is an integral part of the upcoming EU-Ukraine summit, which is to take place on Monday, February 25, in Brussels.

According to the document, the Verkhovna Rada, Ukrainian Parliament, will ensure implementation of recommendations of the EU Council and the European Parliament.

In the document the Verkhovna Rada calls for the European Union and its Member States to ensure the prompt signing of the Association Agreement between Ukraine and the EU as soon as Ukraine demonstrates decisive actions and tangible progress in the areas identified in the conclusions of the EU Council, reported UNIAN.

Notably, the December 10, 2012, conclusions of the EU Council on Foreign Relations included the recommendations on the electoral, judicial and constitutional reforms in Ukraine.

In addition, Ukrainian Parliament requests the EU to ensure full and compulsory implementation of the agreement between Ukraine and the EU countries on a simplified procedure for issuing visas to Ukrainian citizens giving them the right to move freely within the EU.

The document also includes the request to provide adequate expertise and financial support to Ukraine in preparation for the implementation of the Association Agreement, especially while adapting the country's economy and the regulatory environment to operate in a deep and comprehensive free trade area with the EU.

Furthermore, Ukrainian Parliament called for the EU to look into the possibility of preliminary application of certain provisions of the AA regarding the creation of the free and comprehensive free trade area before the ratification process is completed by all EU Member States.

Importantly, the document was supported by 315 out of 349 MPs who were present at the Friday, February 22, parliamentary session.