February 12, 2013
KIEV, Ukraine -- More than 20 years after the fall of communism in Ukraine, many streets and monuments remain dedicated to communist leaders. 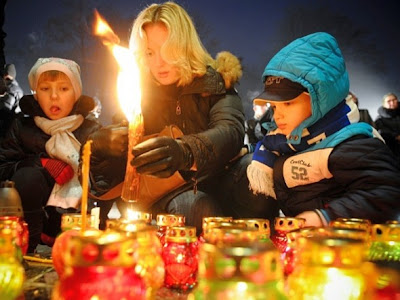 People commemorate victims of ‘Holodomor,’ the artificial famine created in the 1930s by the communist regime, in Kiev on Nov. 24, 2012. It is estimated that as many as 7.5 million Ukrainians died during the famine.

Though the country suffered brutal treatment under the communist regime, which killed millions of people, streets named in honor of former dictator Vladimir Lenin and monuments devoted to the communist era are commonplace.

A 30-foot statue of Lenin stands in Liberty Square in the capital city, Kiev.

Ivan Zhornokley, a resident of Kiev and member of a student comedy organization, says like many Ukrainians his relatives suffered harshly under communism.

“My grannies all survived ‘Holodomor’, and that speaks for itself,” he said.

Holodomor is the Ukrainian term for the artificial famine caused by the communist regime under Joseph Stalin in 1932–1933.

“You can see that communism directly influenced my family!”

Still, Zhornokley does not think it’s necessary to remove the Lenin monument, as he says it’s a part of history.

However it is important to rename streets named after Lenin, he says.

In 2012, research conducted by the Ukrainian website texty.org.ua found that most cities and villages in Ukraine have central streets and main roads named after Lenin.

The website found that the number of Soviet street names outnumbers those connected with independence by 20 times.

Vinnitskaya Province is one of the regions that suffered most during the Holodomor famine—yet a huge number of villages in Vinnitskaya are still named after Lenin, according to texty.org.ua.

Anatoliy Bondarenko, texty.org.ua editor, says Ukrainians don’t have an understanding of why it is important to rename streets and villages, or of the alternatives there could be to Lenin.

“There is a lack of understanding that keeping the names of killers in public spaces is abnormal,” Bondarenko told The Epoch Times.

Ihor Lisodid, an activist working for the International Trial of Communist Crimes Against Humanity Organizational Committee, says communist ideology is still a problem for today’s Ukrainians.

He told The Epoch Times that communists used ideology and “sheer lies” to control people’s thoughts, forming a new, communist worldview in millions of people.

This worldview still influences youth and “holds them in captivity of communist myths” that justify the regime’s crimes.

“How can a community that suffered humiliation, moral damage, and human sacrifices through genocide glorify the executioners?” asked Lisodid.

He says that it’s important to prohibit the communist party and its ideology, to conduct a trial of communist criminals, and to “write the names of Lenin, Stalin, Marx, and a great many of their fellows near the name of Hitler.”

Following the collapse of the USSR in the early 1990s, Ukraine missed the chance to quickly condemn communist crimes, says Bondarenko.

At that time Ukrainians didn’t conduct a real trial of communists for the sake of finding a compromise.

“Now only an evolutionary way is available for us, and perhaps we’ll have to wait decades,” he said.

Lisodid, however, has another opinion.

“It’s not good to hope that time will heal us. It won’t happen, if the international community won’t take any measures,” he said.

“If the international court will begin trials [for communist crimes], then European Parliament (EP) and other international organizations will have to adopt relevant resolutions.”

Lisodid says that the EP and the Council of Europe Parliamentary Assembly have begun evaluating communist crimes, but the process is far from over.

Europe is waiting for similar action from the United States.

“If Ukrainians don’t overpower this disease, then we’ll need help from the outside. … Communist ideology is a dangerous form of disease in society that poses a threat not only to Ukraine, but to countries around the world,” he said.