February 21, 2013
KIEV, Ukraine --A senior Ukrainian prosecutor has said he has evidence that the former president was involved in the killing of journalist Georgy Gongadze in 2000. 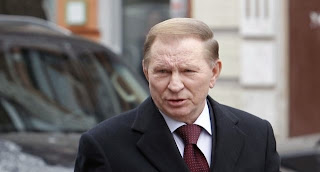 Renat Kuzmin said the government had collected enough evidence to implicate Leonid Kuchma, who led the country between 1994 and 2005.


Mr Kuchma has always denied involvement in the journalist's murder.

Last month, a former police general was sentenced to life imprisonment for the crime, which rocked the country.

The court in Kiev found that Olexiy Pukach had killed the journalist, then cut off his head.

Pukach confessed but said he had acted on the orders of former Interior Minister Yuri Kravchenko, who has since died.

Pukach claimed that Mr Kuchma should also have been in the dock.

An attempt to prosecute Mr Kuchma for ordering the killing collapsed in December 2011.

The judge in that case ruled that secret audio recordings that apparently incriminated him could not be used as evidence as they had been obtained through "illegal means".

A few months before his death Georgy Gongadze founded the news website Ukrainskaya Pravda, which was sharply critical of the Kuchma presidency.

The decapitated body of the well-known investigative journalist was found outside Kiev after he disappeared in December 2000.

At the time his murder sparked protests against Mr Kuchma.