February 24, 2013
KIEV, Ukraine -- NATO welcomed Ukraine’s decision on Friday to join its counter-piracy operation Ocean Shield, while Secretary General Anders Fogh Rasmussen said Ukraine’s NATO membership was on track, but warned there was concern about Ukraine's use of "selective justice." 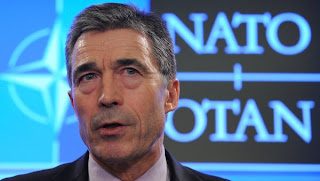 “NATO and Ukraine are key security partners. For many years, Ukraine has been making substantial and very welcome contributions to all major NATO-led operations, including our engagement in Afghanistan,” said Rasmussen, who chaired a meeting of defense ministers in the NATO-Ukraine Commission.

The secretary general and Ukrainian Defense Minister Pavlo Lebedev signed an exchange of letters confirming Ukraine’s intent to contribute a frigate and helicopter to NATO’s operation Ocean Shield, which fights piracy off the coast of Somalia.

Ukraine will contribute the frigate Hetman Sahaydachniy, the flagship of the Ukrainian Navy.

“The exchange of letters serves to confirm Ukraine's offer and NATO's readiness to proceed to the last stage of technical certification, which is necessary to make sure that the Ukrainian contribution is capable of operating effectively with NATO vessels,” the NATO press service said in a statement on its website.

NATO said it provides significant support to Ukraine’s ongoing reforms of the defense and security sectors.

The ministers agreed on a set of priorities to guide cooperation over the next five years, including in training and exercises.

On the issue of Ukraine’s future membership, Rasmussen said NATO's decision that Georgia and Ukraine will eventually join the alliance "still stands."

“We fully respect the non-alignment policy, the non-bloc policy or whatever you might call it. That's for Ukraine to decide,” he said, adding, however, that there was "serious concern" about Ukraine's use of "selective justice."

“In particular, the determined implementation of reforms to reinforce democracy and the rule of law would benefit the people of Ukraine and the entire Euro-Atlantic community.”