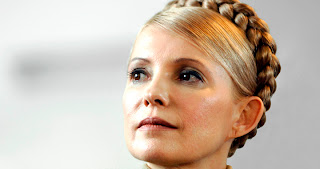 Hours later, however, the court told prison authorities telling that the unnamed witness had gotten sick and would not attend the trial on Tuesday.

"This information was brought to the attention of [Tymoshenko],” the authorities reported in a statement.

“Due to this, there is no need for taking Tymoshenko [to Kiev].”

The developments underscore a major change in Tymoshenko’s defense tactic as she had earlier tried to distance herself from the trial by refusing to join it citing health reasons.

The judge at the Pecherskiy district court in Kiev last week even fined Tymoshenko the equivalent of $2,000 for refusing to attend the hearing.

Prosecutors accused Tymoshenko of plotting with others to order the murder of Yevhen Shcherban, a prominent politician and businessman, in 1996, a charge she had vehemently denied as politically motivated.

The request to be taken to the trial, which is heavily covered by Ukrainian media, shows that Tymoshenko has been seeking to use the occasion to attack President Viktor Yanukovych and his allies.

The developments come as political crisis has been growing with opposition lawmakers blocking Parliament for the past two weeks, postponing indefinitely approval of urgent economic and financial legislation drafted by the government.

The European Union has warned Ukraine that the imprisonment of Tymoshenko and the perceived lack of reforms threaten deals on more trade and closer political ties.

Attendance at the trial would give Tymoshenko access to media that she has been denied for most of the time she has spent behind bars since August 2011.

Tymoshenko was sentenced to seven years in prison in October 2011 for abusing power while on the post of the prime minister to push through a controversial 10-year natural gas agreement with Russia in January 2009.

She said the sentencing was politically motivated and ordered by Yanukovych, her biggest political rival, to remove her from politics.

Although the name of the witness to be questioned by the court was never disclosed, some media reports identified him as Volodymyr Shcherban, a former governor of the Donetsk region.

Prosecutors will seek life imprisonment for Tymoshenko, who they claim has paid for the murder $2.8 million by making a wire banking transaction.

The transaction was made to accounts allegedly controlled by former Prime Minister Pavlo Lazarenko, who prosecutors claim worked closely with Tymoshenko.