February 23, 2013
KIEV, Ukraine -- President Viktor Yanukovych, ahead of a key summit between Ukraine and the European Union, said he shares the EU’s concerns about political prisoners in Ukraine and understands the problem must be solved quickly. 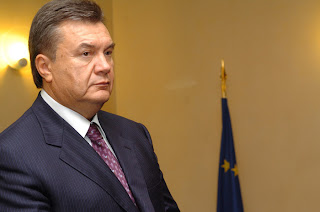 Yanukovych traveled to the Polish city of Wisla for a meeting with Polish President Bronislaw Komorowski and Slovak President Ivan Gasparovic ahead of the summit in Brussels.

The meeting was the last attempt by European leaders before the summit on February 25 to persuade Yanukovych to release former Prime Minister Yulia Tymoshenko and former Interior Minister Yuriy Lutsenko.

The failure to do so may postpone indefinitely an agreement on political association and free trade between Ukraine and the EU, which Kiev hopes to sign at a summit in November.

"Touching the thorny question of Tymoshenko and Lutsenko I would like to once again to confirm: we are well aware that this issue should be addressed in the legal realm," Yanukovych said after the meeting.

The EU has repeatedly expressed serious concerns about the imprisonment of Tymoshenko and Lutsenko, Yanukovych’s political opponents, calling the cases examples of selective justice.

The failure to solve the problem of political prisoners has led to a de-facto boycott of Yanukovych in Europe with his traveling over the past year mostly limited to Asia and the Middle East.

Yanukovych’s remarks may be an early indication that he may have finally got the message.

"Sharing these concerns and anxiety that our friends have, we understand that finding solutions and compromises is one of the issues that must be solved soon," Yanukovych said.

Komorowski, along with other European leaders, has already tried to persuade – and received assurances from Yanukovych a year ago – that the problem will be solved.

However, Tymoshenko, who was convicted to seven years in prison for pushing through a controversial 10-year gas supply contract with Russia in 2009, currently faces even greater pressure.

Prosecutors said earlier this year they will seek life in prison for Tymoshenko for allegedly ordering and paying for the murder of a prominent politician and businessman in 1996.

Tymoshenko, who owned a natural gas trading company in 1996, said the charges are politically motivated.

She denied having any connection to the murder of Yevhen Shcherban.

Tymoshenko and Lutsenko remain to be the key obstacles on the way of Ukraine’s closer cooperation with the EU, including the singing of the political association and free trade agreement.