February 19, 2013
KIEV, Ukraine -- For almost seven decades, Ukraine’s identity was stifled by the Soviet Union and even after its fall, was commonly referred to as “Little Russia.” 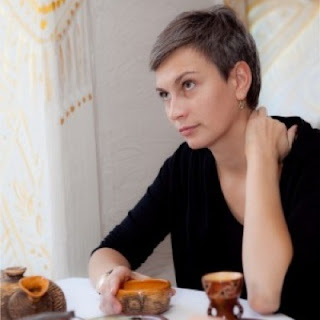 Yet slowly, Ukraine is making a name for itself in the fashion industry and garnering recognition for its innovative surge of creativity.

One measure of the country’s success is the September announcement that it would launch its own edition of Vogue, the magazine’s 20th.

We sat down with Vogue Ukraine editor-in-chief Masha Tsukanova for her first ever English-language interview about the magazine.

In the process we got a lesson in fashion history, and learned why Ukraine deserves not a red, but a gold star.

Fashionista: Can you describe your personal style a little bit? Every editor-in-chief–I’m thinking of your colleagues Emmanuelle Alt and Anna Dello Russo–seems to have a theme to her style.

Masha Tsukanova: Unlike Anna dello Russo, I like convenient things.

These should be things I feel comfortable in for the whole day–like really comfortable trousers and some nice shirts.

Nothing extravagant, but just made of high quality materials.

If it is a sweater, it should be cashmere.

If it is a shirt, it should be silk.

If it is shoes, they should be really nice leather.

Because it is winter, I prefer something more practical like flat shoes.

It is really snowy and cold [in Ukraine] and you can’t wear heels because you don’t want to break your leg–you have to be a little bit more down to earth.

Fashionista: I read that you came from a “black and white” newspaper, how do you think that experience will influence you as Editor-in-Chief of Vogue Ukraine?

I think we will think about facts thanks to my experience at a black and white newspaper.

This is something unusual for glossy magazines in Ukraine.

Everyone is so concentrated on the images that no one actually thinks about what is written behind them.

I hope that the experience which I gained from newspapers will help us not only promote the beauty but also the brains of Vogue Ukraine.

Fashionista: People often associate Ukraine with Russia. How is Vogue Ukraine going to create a separate identity from Vogue Russia?

Well that is easy: we have our own news, our own shops, and our own designers.

We are very different and have nothing to do with Moscow–we have our own identities.

In terms of geography, Russia is really huge–it expands from the border of Ukraine to China which means that there are a lot of nationalities with a lot of different ethnical tastes.

Ukraine is much is smaller and much closer to mainland Europe.

Our tastes are more Western compared to Russia’s.

Here we have a more understated and sophisticated look–maybe we are still not like those in France, but we are something in between France and Russia.

Fashionista: How was the fashion industry in the Soviet Union?

We didn’t have any fashion in the Soviet Union; everything was planned.

The government decided how many trousers, shirts and skirts should be produced, in which color and in which fabrics.

People had absolutely no choice.

Everyone wore the same clothes or shoes and colors were the same and ugly.

You couldn’t express yourself with clothes.

It was simply impossible.

About 15 years ago after the fall of the Soviet Union, we started to have our first boutiques.

Six years ago we got our first luxury shopping street in Kiev.

Recently, for the last five years, the market has been rapidly developing.

New retailers are coming and brands have finally become interested in the country.

Five years ago, the trend was super-luxury.

Now we have become more sophisticated, and aren’t just interested in huge brands and famous names.

The audience is starting to become interested in the smaller, more sophisticated and lesser-known brands.

I think it is a high time for us to come to the market.

Fashionista: Ten years ago did you think Ukraine would ever have a Vogue?

Talks about having Vogue in Ukraine have been around forever.

It was around eight years ago when I first heard about Conde Nast’s plans to come to Ukraine.

Every year, people from Conde Nast International were coming to Ukraine to investigate how the market was developing, to see the stores, to talk to retailers and advertising people.

Every time, they went back saying that Ukraine wasn’t ready.

When the final decision for Ukraine to have Vogue was made, we were really surprised.

We didn’t expect this endless negotiation to ever end.

Fashionista: Are you going to feature Ukrainian designers in Vogue Ukraine?

Yes, we are going to put them in the editorials, shoot them in fashion stories and support them in all possible ways.

Fashionista: Do you think Ukrainian fashion has potential to influence trends internationally or in the US?

Not at the moment but it could be a really fresh look at fashion.

We are probably not strong enough to influence the American market but we could really be interesting to some of the buyers, that is for sure.

Fashionista: What can you tell us about the first issue? What’s the feel like?

There are going to be plenty of fashion stories.

There is going to be a glance at Ukrainian designers.

It is really a huge magazine; Ukraine hasn’t seen a magazine produced locally to such an extent as this one without syndication.

It will be very much focused on Ukraine because we need to introduce the country to our readers abroad.

Our local readers really expect a lot of Ukrainian content–they are tired of the magazines reprinting stories from American, French or Italian magazines.

It is going to be part glamour, part rock n’ roll, and part casual.

Fashionista: How is Vogue going to appeal to such a diverse range of people in Ukraine, given there is a huge divide between those in Kiev and those from more provincial villages.

Somehow the cultural landscape is not so different between a person in Kiev and a person in Simferopol.

Everyone can go to Style.com and see the same material.

It doesn’t mean that those outside of Kiev have less information than those in the city.

But that is going to come.

As for information, your ability to travel, see the world and learn about people–you are quite equal.

Also, Vogue is not just about buying stuff — it is about dreaming about things and a certain lifestyle.