December 14, 2012
KIEV, Ukraine -- So, after two days of brawling in parliament, Mykola Azarov has been re-instated as prime minister of Ukraine among vociferous and physical protests from a newly-emboldened opposition. 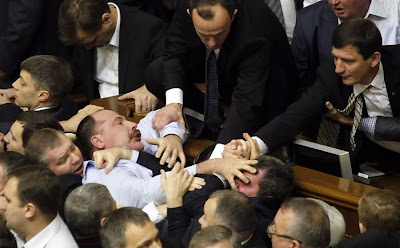 There were shouts of “Shame, shame” on the parliament floor as the brawling engulfed the podium.

Shame it was indeed, but the shame will be bigger still if Ukraine fails to get a grip on pressing problems that include negotiating a loan package with what must be an increasingly wary International Monetary Fund.

The clashes suggest President Viktor Yanukovich’s ruling Party of Regions will find it harder to push legislation through parliament.

And as Timothy Ash of Standard Bank wrote to clients earlier in the day: “I am in Ukraine at the moment and things feel even worse than I thought.”

He was responding to comments from Azarov, before his confirmation, to the effect that Ukraine should “find compromises” with the IMF to secure a deal the country urgently needs to roll over $10bn in foreign debt maturing next year, including $5.9bn it owes to the Fund.

This is what Ash thought of that: Not sure it is about finding compromises with the IMF, Ukraine has to agree to do difficult stuff, which they would rather not do.

If I was the Fund I would have big concerns about signing on to a programme where I had big doubts over the willingness of the administration to hold to the terms of the programme over an extended period.

Any programme would have a high probability of going off track early, and I think the IMF would want assurances that politicians and ministers were suitably committed.

I just don’t see that at present, and especially given that this new government will likely be weak, and increasingly focused on the 2015 presidential election.

Investors will not be happy to see Azarov back.

He and the rest of his government resigned this month, apparently to allow him to take up his seat in parliament.

Azarov had staunchly opposed eliminating costly subsidies on household gas bills, a key condition for securing an IMF loan, and the hope was that his departure would open the way for a more IMF-friendly replacement.

However, it appears Azarov’s resignation was an attempt to secure him a second term and a fresh mandate – as indeed has happened.

But if throwing Azarov back among the brawling lawmakers is a bid to strengthen Yanukovich’s position in the presidency, it is not clear what advantage will be gained, especially if the IMF backs away from a rescue package.

The IMF may conclude that not helping Ukraine could be costlier than helping it, even with the prospect of the Ukrainian end of any deal unravelling before it is stiched together.

Maybe investors are betting as much.

The hryvnia gained slightly against the US dollar on Thursday, Bloomberg reported, and the yield on Ukraine’s dollar bond due in 2022 fell to 7.691 per cent from 7.773 per cent.