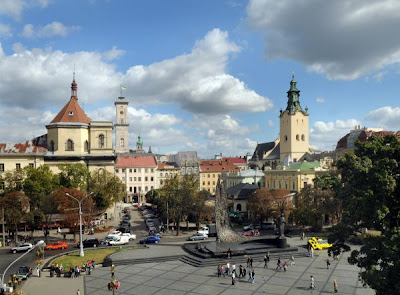 Lviv - the soul of Ukraine.

The country's touristic prospects changed from being an outsider to a "must-see" destination after hosting Europe's major sporting event - EURO 2012 football championship.

Ukraine as a whole as well as its capital Kiev, Crimean Peninsula, Lviv, Chernobyl site and even Salt Tunnels of Solotvyno appeared in prestigious international travel ratings.

"The Crimean Peninsula, with its voluptuously curved Black Sea coast of sparkling cliffs, is paradise - with Riviera-grade vistas but without Riviera prices," describes the popular tourist magazine the Ukrainian gem.

Moreover, known travel website TripAdvisor announced its Travelers' Choice 2012, naming Ukrainian Kiev the top destination on the rise among the cities of The Old World.

"Having survived the Mongol Empire, WWII, Chernobyl, and Soviet rule, Kiev is the proud capital of the Ukraine," describes the city TripAdvisor.

The Globe Spots featured Ukraine in their Top Countries to Visit in 2013 list.

Ukraine took the eighth spot in the Top Ten.

"Ukraine provides a surreal combination of rock-till-you-drop coastal party towns to Crimean holiday resorts to cosmopolitan capitals to villages you'd swear you were still in the USSR," reads globespots.com.

Chernobyl Reactor #4 - the site of the world's biggest nuclear disaster in 1986 - was named eighth among the Spookiest Buildings Around the World while Salt Tunnels of Solotvyno became tenth World's Saltiest Sights.

Taleb Rifai, Secretary-General of UNWTO, stated that Ukraine had to promote its tourist potential, letting the world discover "your mystery - the great city of Kiev, a wonderful country".

Ukraine's growing popularity is also due to the advancement of tourists' urge for independent traveling and, hence, authentic and unique experience, added Rifai.

dissertationconsultant said…
This info about Ukraine Scores High In Six International Tourism Ratings Tourism Boom Expected In 2013 is very helpful for me! Thanks for giving out. it’s all very fresh and clearly written!

dissertationconsultant said…
This comment has been removed by the author.
3:51 AM

Unknown said…
This comment has been removed by the author.
7:35 AM

Unknown said…
This page contains all the info I wanted. The exposition inquiry may get some information about your best quality, an experience that molded you or the reason you need to go to a certain school. essay write