To Maintain Ukraine: Was Money Spent In Vain?

December 16, 2012
KIEV, Ukraine -- According to the Journal of Public Procurement in Ukraine, the government spent almost 60 million euros ($79 million) on the needs of President Viktor Yanukovych and his clerks in 2012. 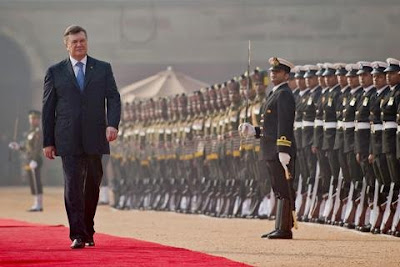 Working for the public finance project Our Money, the researchers Lesya Ivanova and Yuriy Nikolov published the figure in the Ukrainian edition of Forbes magazine.

Such information about government funds and its use is technically available to anyone.

"The tricky part is to process the data and find all the possible purchases and expenses connected to the life of the president and the subordinate institutions," Nikolov said.

"All in all, it took us a year to collect the information and three days to analyze the data."

They found that such expenses included seemingly excessive renovation of state property and facilities.

For instance, in the past three years, almost 23 million euros ($30 million) was spent on the reconstruction of the Synhora residence in the Carpathian Mountains.

The Ukrainian news channel TVi has reported, however, that the "gazebo" is actually a restaurant where the president plans to celebrate New Year's Eve.

All in all, 8.8 million euros ($11.6 million) was allocated for various reconstructions.

For example, 11.4 million euros ($15 million) went toward reconstructing the road that connects Kiev with the Dneprovsko-Teterevsky hunting grounds.

As of January 2012, it contained 385 cars, including 55 different Mercedes-Benz models, 22 Toyota Land Cruisers and three BMWs.

Reportedly, every time Yanukovych leaves Kiev, his cars are sent ahead to meet him at the destination.

As much as the president loves to travel by car, he really seems to have a thing for flying, as well.

They are reportedly equipped with plasma TV sets, climate control and leather interiors.

Such a machine has all the necessary utilities for the president's comfort: a multimedia center, satellite communications, a kitchen and leather seats that easily transform into beds.

According to Nikolov, neither the government nor the opposition reacted to the release of the information.

In fact, the article was not aimed at the ruling powers at all.

"The only thing that may influence the government is something really frightening like the closing of a bank account abroad or Maydan," Nikolov said, referring to 2004's Orange Revolution.

The main purpose of releasing the figures was to aid the public in making an informed judgment on Yanukovych, Nikolov said.

"As opposed to the Czech Republic, in Ukraine television and Internet publications are separated by an abyss when it comes to the concept of freedom of speech," Nikolov said.

According to him, Ukrainian TV reports on governmental actions with a positive or merely neutral air.