December 28, 2012
KIEV, Ukraine -- Even in Ukraine’s parliament, where brawls and shouting matches are common, the nationalist Svoboda party stands out. 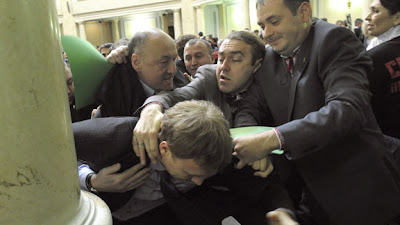 Svoboda MPs join in a mass brawl in the Ukrainian parliament earlier this month.

“I told our boys to follow two paths – sharpen their wit in the library, and [beef up their muscle] in the gym. We don’t see other methods to protect our nation,” said party ideologue Irina Farion after fights broke out as the new parliament convened earlier this month.

The small but vocal party commenced its work in Ukraine’s new legislature by dramatically sawing through an iron fence that surrounds parliament and then brawling with pro-presidential lawmakers for two days.

Yet it is not its brawn, but rather the party’s ideology, that is fuelling concern.

Boasting a cross-border alliance with France’s National Front, Svoboda’s leadership has been criticised at home and abroad for racist and homophobic views.

Considered for years a marginal party with support limited to Ukrainian-speaking western regions, Svoboda, which translates as Freedom, is today a closely watched newcomer to Ukraine’s 450-seat parliament.

The party made a surprise breakthrough in October’s parliamentary election, mustering 10 per cent of the national vote and winning 37 seats.

Its rise to prominence has shocked many Ukraine watchers.

“The surge in Svoboda’s popularity is clearly a protest vote, a reaction to the policies of [President Viktor] Yanukovich, who draws his support mostly from Russian-speaking eastern Ukraine and whose policies are seen by many voters as ‘Ukrainaphobic’,” says German-born Andreas Umland, a visiting professor at a Kiev University who follows extremist groups.

“For many Ukrainians, Svoboda is viewed as a disciplined party that could put up the strongest of fights with Mr Yanukovich and his oligarchs.”

While the EU and the US are increasingly frustrated with Mr Yanukovich over attacks on democracy, Svoboda’s emergence on to the national scene has raised concern over who could be next to take power in Ukraine.

Oleg Tiahnybok, Svoboda’s leader, made headlines in 2004 when he called upon supporters to fiercely target Ukraine’s enemies – at home and abroad – by carrying on the fight of insurgent nationalist fighters from the second world war.

“They did not fear, but took up their automatic rifles, going into the woods to fight Muscovites, Germans, Jewry and other filth which wanted to take away our Ukrainian nationhood.

It’s time to give Ukraine to the Ukrainians.

Like them, you are most feared by the Moscow-Jewish mafia which today runs Ukraine,” he said.

Neither Mr Tiahnybok nor Svoboda have taken back this rhetoric.

Party lawmaker Yuriy Syrotiuk, formerly spokesperson for Mr Tiahnybok, said his leader was much more careful in how he chose his words.

“On the other hand,” he added, “the fact that there are less ethnic Ukrainians in our nation’s business elite is a consequence of centuries of occupation and injustices directed at our Ukrainian ethnos.”

Despite alarm raised by watchdogs following hate groups, as well as Israel’s foreign ministry, the party claims it is misunderstood, insisting its position is “pro-Ukrainian, not anti-Semitic, racist or xenophobic”.

Mr Tiahnybok said immediately after he was elected in October: “I respect the position of [Israel], which defends the interests of its citizens. I would like to ask Israelis to also respect our patriotic feelings. Probably each party in the Knesset is nationalist. With God’s help, let it be this way for us, too.”

In past centuries, he says, Ukrainians suffered similarly to Jewish people, and were nearly wiped out by the Holodomor genocide, the Soviet-induced 1930s famine.

A handful of Ukraine’s richest oligarchs are ethnic Jewish, while some others have Russian, Tatar and other roots.

Mr Mokhnyk stops short of identifying by name those who he believes pose a risk to Ukraine, but he insists there is nothing wrong with labelling threats on the basis of ethnicity.

“What, I need to list them by name? Is it not evident who they are? Why doesn’t everyone make such a big deal when the Italian Mafia is referred to as being Italian?” he asks.

A poll commissioned by Kiev’s Democratic Initiatives Foundation found that 48 per cent of Svoboda’s voters had higher level education – 10 percentage points higher than any other party.

“I am very surprised to hear this,” says Brooklyn born Rabbi Bleich, who serves a reviving Jewish community in Kiev.

He stops short of calling Svoboda anti-Semitic: “It looks like people didn’t vote with their minds, but with their hearts,” he says.

“It is definitely disturbing . . . It’s a challenge for Ukraine. Some inner searching is needed to see why such a large portion of the population voted for a party that is expressing extremist views.”

Most of Svoboda’s electorate is not racist, Mr Umland believes.

“They view themselves as patriotic. But while the party leadership is trying to become more moderate, it has racist and xenophobic views.”

Volodymyr Musyak, a 28-year-old Kiev resident and martial arts teacher, said: “I voted Svoboda because they are the most dedicated to freeing Ukraine from this oppressive regime of oligarch bandits. I don’t think they are anti-Semitic. I certainly am not.”

The rowdy Svoboda is starting to play a dominating role in Ukraine’s three-party opposition, which includes the party of jailed opposition leader Yulia Tymoshenko.

In the halls of parliament, Svoboda’s lawmakers have outpunched the UDAR opposition party – the acronym means “punch” in Ukrainian – led by heavyweight boxer Vitali Klitschko.

While the other two opposition parties have expressed discomfort with Svoboda’s extremist views, they claim to be united to topple what they describe as Mr Yanukovich’s oppressive and kleptocratic oligarch regime.

Experts question whether Svoboda’s popularity will increase sufficiently to render it a significant force in national decision-making.

But if his party comes to power, Mr Mokhnyk says strategic state assets “stolen” by oligarchs through “corrupt privatisations” would be renationalised.

The Communist party, as well as former Soviet apparatchiks and KGB agents, would be banned from holding office; social justice would be attained by shifting the tax burden from cash-strapped small and medium businesses to large ones.

Also, ethnicity would be stated in Ukrainian passports.

“What’s wrong with this?” Mr Mokhnyk asks. Ukrainians, as well as people of other ethnic descent, should “proudly exhibit their ethnicity”, he claims.

“We have seen this before,” says Viktor, a Ukrainian of Jewish roots who served in government and recalls Soviet-era quotas that restricted ethnic minorities from holding senior positions.

“It is clear that that Svoboda sees a difference between ‘real’ Ukrainians, and others . . . second-class citizens who could, in their view, pose a national risk.”

He adds sarcastically, pointing to recent homophobic remarks by Svoboda’s leadership: “Why don’t they complete their party programme by also introducing sexual orientation into the passport?”

Unknown said…
I really had a great time with your post! I am looking forward to read more blog post regarding this! Well written! http://topassignmentwriters.com/

Anna said…
As nice blog,but you could have made this blog my site more cool if you could configure the language changer pluigin but all the same you have done a good job
12:56 PM

Unknown said…
Truly value this magnificent post that you have accommodated us. Also check out this article http://www.kveller.com/my-interfaith-marriage-almost-failed-heres-what-we-did/ Great site and an awesome point too i truly get astounded to peruse this. Its okay.
2:41 AM