October 12, 2012
KIEV, Ukraine -- The Regions Party has been seeking to thwart an agreement between the two opposition groups over single candidates in majority districts, Arseniy Yatseniuk, the leader of the opposition Batkivshchyna party, charged Wednesday. 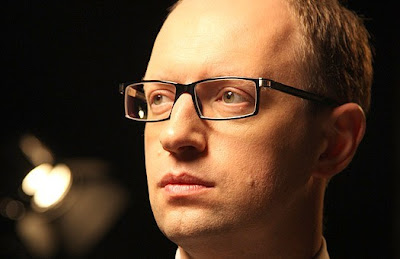 The agreement, which is being discussed between Batkivshchyna and Udar, led by heavyweight boxing champion Vitaliy Klichko, is essential for a chance to defeat the ruling Regions Party at October 28 elections.

“I understand this is a threat for the Regions Party,” Yatseniuk said in an interview aired by the Pershiy state television.

“I realize they will be doing everything to disrupt the talks.”

Yatseniuk said media controlled by loyalists of the Regions Party has been already spreading allegations that Batkivshchyna has been secretly working to undermine Udar.

“I state clearly that we have only one political opponent: it is the Regions Party and President Viktor Yanukovych,” Yatseniuk said.

The agreement is supposed to call on the opposition groups to withdraw weaker candidates in majority districts and to throw greater support behind the remaining candidate in what may be a game changer.

There are 225 majority districts in Ukraine that will elect 225 lawmakers in the 450-seat Parliament.

Another 225 seats will be distributed according to party list vote.

A candidate at a majority district may withdraw from the race 12 days before the election date, which gives Batkivshchyna and Udar 6 days to finalize the agreement.

The talks, which have been underway for months, are complicated by recent opinion polls suggesting that Udar has been quickly increasing its popular support, while Batkivshchyna has been losing it.

Udar has just become the second most popular party in Ukraine displacing Batkivshchyna to the No. 3 spot that has been confirmed by three independent opinion polls released over the past week.

The failure to agree on single candidates has led to Batkivshchyna and Udar losing several important local elections to the Regions Party earlier this year.

Batkivshchyna has signed a similar agreement with Svoboda, a nationalist opposition party, on candidates running for seats in western regions of Ukraine to eliminate unnecessary rivalry.

But the agreement with Udar, which has strong presence across Ukraine, including key battleground regions in central parts of the country, will be much more important.

“If our partners have similar positions then results of the election will be totally different,” Yatseniuk said.

“This will change a picture.”

Udar enjoyed support from 17% of respondents in the poll conducted between Sept. 12 and Sept. 27, followed by Batkivshchyna’s 15%, according to GfK NOP research company.

The ruling Regions Party led the poll as the most popular party with 25% support among respondents, according to GfK NOP.