May 09, 2012
MOSCOW, Russia -- While former Ukrainian prime minister Yulia Tymoshenko keeps up a hunger strike in a Kiev prison, her daughter, Yevhenia, has emerged as a politician every bit as determined as her mother. 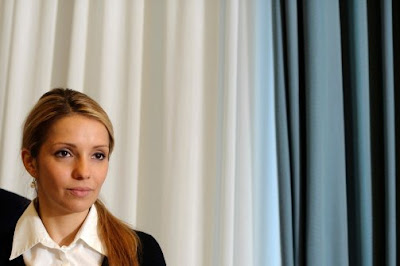 Yevhenia Tymoshenko, daughter of Yulia Tymoshenko, the detained former prime minister of Ukraine, held a press conference with the International Society for Human Rights (ISHR) in Germany.
Yevhenia’s heart sank when she looked at her mother, Yulia Tymoshenko, who is two weeks into a hunger strike in Kiev’s Kharkov prison.
Dark circles ringed the mother’s eyes, she was unable to walk because of constant back pain, and her body was starved and skinny.
Yevhenia’s mother, the former prime minister of Ukraine who was sentenced to seven years in prison last year after what many consider a political show trial, looked to be fading away.
Just as she had during her previous visits, Yevhenia begged her mother — who won 45.4 percent of her country’s vote in Ukraine’s last presidential race in 2010 — to quit the destructive strategy and start eating again.
“Stay strong!” was the mother’s reply to her daughter.
The hunger strike would continue. And Yevhenia is left relaying her mother’s protests.

Tymoshenko decided to stop eating, her daughter said, after three muscular prison officers appeared in her cell at midnight, took her cellmate away, turned off the light, and wrapped the politician into a blanket to transport her to a hospital, where Tymoshenko believed she would be mistreated.
“She still trembles when she tells me about it. One of the officers hit her in her stomach so hard she could not breathe,” Tymoshenko’s daughter said.
In less than a year, the 32-year-old Yevhenia, or less formally, Zhenia, a lady as slim, blonde, and elegant as her mother, has transformed from a low-profile restaurant owner and manager of a children’s charity into a worldwide messenger for Ukraine’s most famous political prisoner.
The daughter has breakfasted with President Obama to relay her mother’s plight.
She has met with Chancellor Angela Merkel, EU commissioners, and countless rights groups.
With her mother’s plight a hinge from the old life to the new, Yevhenia Tymoshenko is becoming a politician sooner than anyone might have expected.

Authorities dismissed as untrue Tymoshenko’s claims of her beatings but admitted she was on a strict diet of water and juice.
As a loving daughter, Yevhenia says she now wishes her mother had escaped the country when it was still possible.
“President [Viktor] Yanukovich knows that as soon as she goes free, no matter how weak she is, she would beat him in the political arena, so he prefers to use torture to break her psychologically,” Yevhenia says.
The daughter says she believes that the Ukrainian president miscalculated, underestimating her mother’s resolve and international connections — the part of the strategy left to Yevhenia today.

Her mother’s bruises angered thousands of protesters across the country, who took to the streets for “Stop dictatorship!” marches in Lugansk and Kiev this week.
But Ukrainian street politics may not save Tymoshenko this time.
“The street protests are not going to help to save Yulia,” says Marina Pyrozhok, an independent political expert based in Kiev.
“Yanukovich’s politics is like a tank [that] rolls over any critical voice.”

The younger Tymoshenko feels more optimistic: every week she flies to talk to her mother’s old — and new — friends in the European parliament and Strasburg court about her mother’s abuse in prison.
She has relayed to her mother “supportive and warm letters” from Secretary of State Hillary Clinton.
In November, she attended that breakfast with Obama.

Soft-spoken and shy, with her mother’s penetrating eyes and appealing, affirmative way of articulating her statements, Yevhenia sees her own mission as being her mother’s defender and savior.
“My job is to yell to the world about political repressions.”
But last night at a Kiev café, Yevhenia fought back tears.
“I am learning courage from her. I want to be as strong as her,” Yevhenia said of her mother, who spent 15 years as a politician trying to transform Ukraine into a candidate for the European Union before being convicted and sentenced last year on charges stemming from a gas deal she signed with Russia when in power in 2009.
The United States and the European Union have both condemned the charges against Tymoshenko as politically motivated.
Yevhenia says that to save her mother, she would go to any destination: “If Vladimir Putin invites me to tell him what they are doing to mother, I will go to Moscow, too.”
But at least for now, Putin, who was sworn in this week for a new term as Russia’s president, has not called her.
But with or without Putin, a crisis is brewing over Ukraine’s political trials.
At least seven European leaders have canceled their participation in the May 11–12 summit of Eastern and Central European in Yalta, to show support for Tymoshenko and other Ukrainian political prisoners.
And longtime members of Yulia Tymoshenko’s team welcome her daughter’s courier role.
Wherever Yevhenia goes Yanukovich most likely would feel his “outcast reputation,” said Hryhoriy Nemyra, Tymoshenko’s former deputy, after a Monday meeting in German Parliament.